Insights from the Linguistic Landscape

The Migration, Identity, and Translation Network

MITN is an interdisciplinary research network hosted by the University of Warwick and Monash University, Australia. We connect students, early career researchers, senior academics and relevant non-academic stakeholders whose interests relate to migration, multilingualism, identity and translation. Here we showcase insights from MITN research exploring multilingualism in the city of Coventry.

In 2019, students at our Sprinter School in Multilingualism and Diversity (MultiDiv) explored the diverse character of Coventry through a linguistic landscaping project. Working in teams, they conducted a field trip to various locations in Coventry to collect image and interview data on multilingualism in the city in order to build up a picture of its diverse linguistic landscape and published their findings in research blogs.

Here are some insights from what they found;

What is a linguistic landscape?

The linguistic landscape of a location refers to the use of language on signs in the location. By exploring what words are used and in what languages in the physical environment, we can learn about the practices and perceptions of the people and institutions who use and govern this space.

Our sites reflect our interest in the perspectives of multilingualism in Coventry through the eyes of newly arrived inhabitants and the service providers who work closely with them.”

One of the institutions which kindly facilitated our students to collect data was St Francis of Assisi Church, Radford. In addition to providing traditional church services, St Francis acts as a community centre for migrants of diverse national, cultural, and religious backgrounds.

Sign outside the church describing the activities on offer

“To be considered a sign each item had to be attached to a surface and include text. Signs were further divided according to their author into three groups: those put up by an external authority, such as health and safety signs, those authored by the organisation itself, which included posters describing activities of the church as well as its function as a community centre, and the last category were signs created by the community members themselves; handwritten notes asking others to pray for them.”

“As can be observed above, most signs were authored by the organisation. We identified a single multilingual sign positioned near the church building entrance. The mutually translated sign saying 'welcome' in numerous languages was purely symbolic rather than informative, as the languages present did not match the demographic information of service users. This represents the church as an inclusive and multilingual environment.” 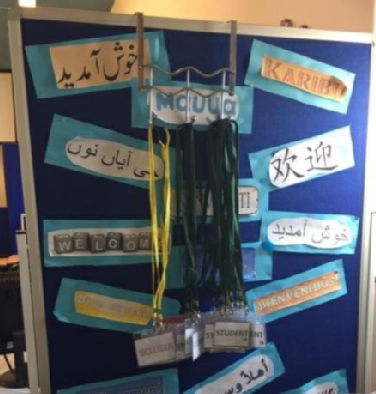 “Rather than communicating vital information to those who do not understand English it is a symbol of inclusivity and openness to speakers of all languages...

All signs authored by external authorities were in English, which suggests that there is no official language policy in place which would insist that information be presented in languages other than English. The exclusive use of English in signs put up by community members indicates that the clients have internalised the church as an English speaking environment…

From the perspective of the church, giving information in certain languages but not others might be seen as excluding speakers of languages which are not represented…”

“There was an overwhelming presence of monolingual English signs, which included universal, image-based signs. This contrasts with the highly multilingual target audience and implies an underlying assumption that most readers will speak the lingua franca of English…

The other institution which kindly facilitated our research was Coventry Central Library, which offers a range of services for education, cultural inclusivity and community building.

“In line with one of the Central library’s aims, the interviewees also tended to use the library’s space for social gatherings, presumably with the aim of bringing various migrant groups together…

[W]e noted not only the amount of signage in only English but also its prominent placement in all other signs. For example, the main sign advertising the library’s “World Zone” was written solely in English and the signage for the foreign-language literature was written in English first and then the language of the literature. When speaking to those within the library there seemed to be little awareness that there were books written in their preferred languages and for those who were aware of the “World Zone” they often felt that their literary tastes were not adequately catered for … In the library’s “Rhyme Time”, English is used by all the children and parents, yet all are encouraged to share their own cultures’ stories through the means of English, further suggesting the city’s acceptance of its multiculturalism, if not its multilingualism.”

Figure 4. The library provides Chinese storytelling and a book group for Chinese people

“The interviews indicated that the city of Coventry is home to a wide range of different experiences for speakers of different languages. For example, speakers of Punjabi, the highest recorded language used in Coventry after English (Census, 2011), suggested that they had no requirement or desire to access multilingual media due to an expansive community of speakers established within the city. Individuals whose languages constitute only a small proportion of the recorded language communities and whose languages were not provided for in the Central Library, such as Yoruba, felt that “other languages are not encouraged”.”

“[I]t was found that the proportion of monolingual English signage is significantly higher than multilingual signage across the three locations surveyed … the most linguistic diversity was present in Greyfriars Walk...

The languages present in the linguistic landscape of Greyfriars Walk (Table 3) include Chinese, Polish, Indian languages, French, and English. There is a discrepancy with the linguistic landscape in this location compared to the languages represented in the 2011 Census (Office for National Statistics, 2011). Perhaps the most noticeable discrepancy is the higher proportion of Chinese writing in the linguistic landscape, whereas only 0.8% of the 2011 Coventry population spoke dialects of Chinese (Table 4). This may be attributed in part to the age of the Census data or the particular location surveyed; additional research would need to be conducted to further support or refute this hypothesis.”

“…many Chinese businesses with signage showing either mutual translations or only Chinese words depending on the customers they were targeting. Some ads and posts only in Asian languages appeared on that road as well. There were also several food stalls on the way to the library, offering European, Asian and Middle Eastern fast foods to customers of all nationalities. On these stalls, English was the dominant language, but individual foreign languages appeared, too.”

“In the market, English was still dominant, yet other languages appeared on food and grocery items as well. Chinese was particularly observed in unofficial signs marking foods and prices. Similarly, we could hear different languages spoken by different vendors and customers.”

What the people of Coventry think

Students interviewed people at the various locations to learn about their views of multiculturalism and multilingualism in the city.

“Non-English-speaking clients echoed the viewpoint that acquiring English was the essential key to successful integration:

'We need to learn their language in order to be like them.'

The discourse from staff, volunteers and clients at both the church and the restaurant was consistently focussed on interculturalism rather multiculturalism;

“Surprisingly, the majority of the interviewees expressed their awareness of linguistic and cultural diversity in Coventry despite English being the dominant language that most interviewees use in their daily interactions with the groups of people outside their ethnic groups … Some interviewees mentioned that they keep their mother tongue sharp by signing up to informal social groups and language-specific associations within their communities…

[T]here seemed to be agreement amongst those who we interviewed that Coventry in general and the library specifically was making every attempt to create an environment where every culture and every language felt included and accepted.”

“Coventry has welcomed more than 100 refugee families through the Resettlement VPR and VCR schemes over the past 5 years.”

“Coventry appears to be achieving its goal of being a diverse city in which all cultures are welcomed. The numerous initiatives as part of the city’s migrant and refugee policies, and in particular those linked to the 2021 City of Culture project, are creating a vibrant and energetic momentum towards integration.”

The linguistic landscape of Coventry

Our students discovered that the languages used on signs in Coventry did not fully reflect the various languages spoken by its inhabitants.

“…it is evident that a discrepancy exists between the Census data and the expected presence of linguistic diversity through signage and media in public spaces. Given the recent influence of migration changes in the UK (Office for National Statistics, 2019) it would be expected that a rise in multilingual media would be evident, alongside the evidence of pre-existing linguistic communities that were recorded in the Census nearly a decade ago (Office for National Statistics, 2011) … this is not as visible in the linguistic landscape as we might have expected.”

They characterised the city’s cultural identity as multicultural rather than multilingual, except in certain locations.

“The city’s signs offer us a way of seeing how the linguistic landscape is changing, with this being seen most notably in the unofficial signs of the city. English remains an important bridge between the many cultures that inhabit the city of Coventry, but the city itself seems to celebrate its multiculturalism in a monolingual fashion …

English is used in Coventry as the lingua-franca, as the language that bridges the gap between the myriad languages spoken in the city …

Coventry embraces multiculturalism but cannot yet identify as a multilingual city. One possible exception to this is in the marketplace, where unofficial signs are used throughout in multiple languages or even monolingual, non-English languages such as Mandarin. Here, English is still used as the lingua-franca, yet the use of these unofficial, non-English signs seems to encourage both mongers and shoppers alike to use their preferred languages…”

What this means for Coventry

Finally, our students discussed the implications of their findings for contributing to Coventry’s self-actualisation as a diverse, welcoming city and future directions for research in this area.

“Increasing the presence of multilingualism within the linguistic landscape … may help to make multilingual speakers feel welcomed in the city.”

“Future studies could explore language policy and the regulation of signs as put up by businesses and individuals, and how this aligns with the community’s requirements and reality. Further research following the next census in 2021 could provide a more comprehensive and accurate analysis of the relationship of population, country of origin, language and the support that government policy provides for its multilingual speakers in the city of Coventry.”

We would like to thank St Francis of Assisi Church, Radford, and Coventry Central Library for facilitating this project and all of the community members of Coventry who kindly participated, without whom this project would not have been possible.

To read the students’ blogs in full, please visit our archive.