The University of Warwick (UK) and New York University (USA) have signed a new agreement as part of a consortium of universities to establish a Center for Urban Science and Progress (CUSP) in downtown Brooklyn, New York City.

The announcement was made on 23rd April 2012 by New York’s Mayor Michael R. Bloomberg, and New York University’s President John Sexton. The unique consortium of world-class academic institutions, and private technology companies, will lead to the creation of the applied science research institute to address the needs of cities worldwide.

Being ‘in and of the City’ is part of NYU’s DNA; at no point has that been truer than today. New York itself has always been part of the educational experience at NYU; with CUSP, New York will also be a living laboratory, a source of research, a test-bed for new ideas, and the economic beneficiary of our researchers’ discoveries. CUSP has drawn together an exceptional group of educational and industrial partners to develop technologies to address an increasingly urbanized world. Attracting partners of such caliber is a validation not only of CUSP’s core idea, but also of the Mayor’s vision to make New York a capital of science and technology. This is a great and proud day for New York and for NYU.

The Vision for CUSP

For the first time in history, more than half of the world’s population lives in urban areas; in just a few more decades, the world's population will exceed 9 billion, 70 percent of whom will live in cities. Enabling those cities to deliver services effectively, efficiently, and sustainably while keeping their citizens safe, healthy, prosperous, and well-informed will be among the most important undertakings in this century. CUSP will tackle these urban challenges and set the research agenda on the science of cities, educating the next generation of engineers in how to apply that research.

This vision fits well with Warwick’s own Global Priorities Programme which seeks to apply research to global challenges, focusing Warwick’s world-class, multidisciplinary research on key areas of international significance, by bringing together scholarly expertise from across faculties and departments.

Warwick is a globally connected University and we are delighted to have the opportunity to work in and with New York, one of the world's most exciting and vibrant cities. The aims of the Center for Urban Sciences and Progress are closely aligned with many of Warwick's own research priorities of manufacturing, energy, food security and healthcare. These themes all have significant impacts on the lives of 21st century city dwellers. Warwick already has significant experience in applying those research themes to needs of cities and it is generating significant interest in that work from a range of policy makers and city leaders.

The University of Warwick also brings to this collaboration its long history of close working partnerships with businesses which range from multinationals through to small and medium-sized firms, all of which benefit from access to the University's technology and knowhow and apply that knowledge to create new jobs and expand their businesses.

"Living laboratories" will be essential to CUSP's research. CUSP will work with municipal agencies in each of CUSP's partner cities, to get privileged access to actual physical city infrastructure and the real world data on and from that infrastructure to help those agencies meet the challenge they by applying research led solutions in real-world settings. New York’s Metropolitan Transportation Authority has already agreed to be our prototype partner in this sphere, giving CUSP’s researchers access to the very specific scientific and engineering challenges the agency faces in the coming years.

Downtown Brooklyn has been identified as the preferred location for CUSP - it is a vibrant, creative, entrepreneurial neighborhood whose energy will be leveraged by the tech cluster we expect to spark.

We have identified a particularly promising site: 370 Jay Street, an empty City-owned building adjacent to MetroTech and NYU-Poly. It will be just a few short subway stops from NYU’s main campus in Washington Square, giving CUSP immediate access to thinkers and practitioners who are creating and implementing scholarship on urban issues across the many disciplines found at a major international research university.

Find out more about the developments with the Center for Urban Science and Progress on the New York University website. 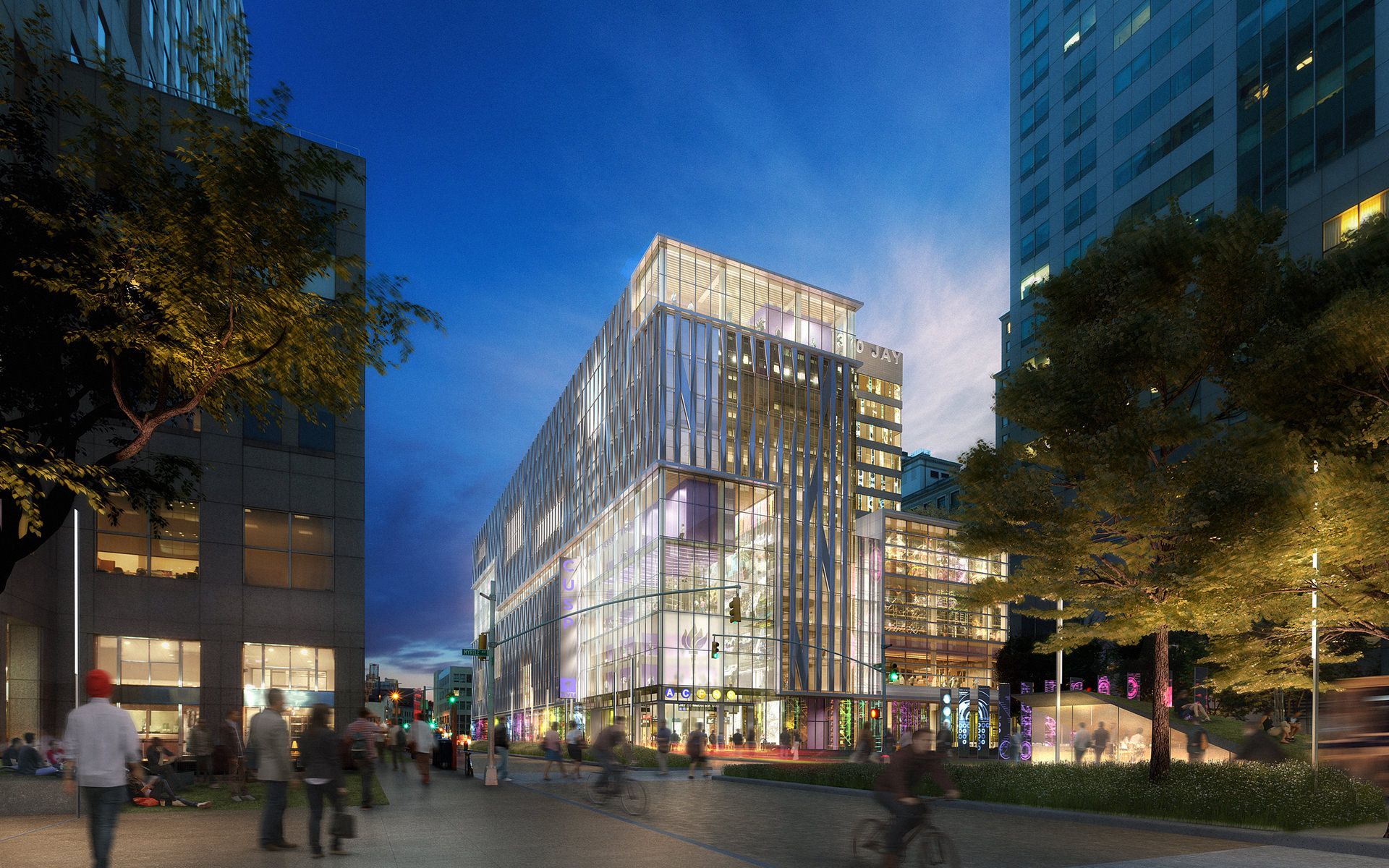 The academic partners include:

The industry partners include:

Find out more about the developments with the Center for Urban Science and Progress on the New York University website.