February's podcast shows that campus is an integral part of the Warwick experience, but which buildings have been here the longest? In our second blog we give a rundown of the first 10 buildings to spring up on campus.

The establishment of the University of Warwick was given approval by the government in 1961 and received its Royal Charter of Incorporation in 1965. The City of Coventry and the County of Warwickshire brought the University of Warwick into being on a 400-acre site granted jointly between them (which has its own fascinating history). As the University extended its land holdings, acquiring Westwood and Cryfield, it also purchased the original buildings there. These buildings weren’t new, but it seems a shame to miss them out, so we’ll start our rundown with a 0!

0a) Original Cryfield
Acquired by Warwick at its foundation, the buildings at Cryfield have a long history stretching back over 300 years. Records show that Cryfield Grange Farm and its outbuildings were originally built in 1639. What is now established as the Vice-Chancellor’s house, together with its farm and outbuildings, were built in 1760. Cryfield now hosts student accommodation, the Cryfield Centre and sports pitches.

0b) Original Westwood
The site which is north of the main campus was originally the Coventry College of Education until its merger with the University in the mid-seventies. The buildings that are now the Post Room, halls of residence and social buildings, Warwick print and the music centre on Westwood’s triangular campus were built throughout the 1950s.

1) Rootes Social Building
The Rootes Social Building was opened in 1966, one of four buildings first erected on the main campus. It was a large area which was christened the “Airport Lounge” once students discovered that the design was very similar to that of Newcastle Airport. General Students Union meetings were held here, as it was the one large space on campus. It is now the home of the Rootes Learning Grid, restaurant, bar and conference facilities. Radio Warwick was launched in 1971 and the studios were situated in a wooden hut behind Rootes.

2) Benefactors Hall
In 1988, Helen Martin, sister of Warwick benefactor Jack Martin was revealed as a prolific Warwick anonymous benefactor following her death. Her donations enabled the construction of Benefactors Hall in 1966, a residence specifically for American students. She also enabled Anglo-American student exchanges, an American travel fund, and the creation of the Arts Centre and Jack Martin Residences.

3) Science Block
Opened in 1966, the Science Block originally housed Maths and Chemistry (or Molecular Sciences). When Physics moved to its new premises, a Department of Biology was also founded in the building by Professor Derek Burke in 1969, who remembers, “There were no other staff, there was no equipment, and there was not a test tube in the building, not a single piece of equipment. And we had a year before teaching started to get an undergraduate course together.”

4) Library
By 1965 the library had already acquired around 45,000 books, and a Library to house them was opened in 1966. Arthur Lyons, a master’s student at the time, recalls how interesting it was to see the library being built, especially when all the white tiles that were on the external wall started falling off. “Bearing in mind the vintage, the 1960s, it was certainly trendy architecture to have white tile buildings….but we were certainly surprised when it started falling down.”

5) Boiler House
The boiler plant was built in 1966 to heat, light and power the whole main campus site. In 2013 the original was replaced by a new high efficiency plant, upgrading and modifying the existing pipework, water treatment and pressurisation systems.

6) Rootes Residences A – L and M – P
The first halls of residence were named after Lord Rootes, chairman of the promotion committee which founded the University. Rent was originally £4.82 per week! Alan Phillips, Physics student and Student Union president (‘68-‘69) remembers that small common rooms in Rootes became popular social areas when they were adapted to become common rooms as the kitchens were extended. These were essential in the days before many social spaces were available on campus.

7) Physics
The new Physics building was built in 1966 and Queen Elizabeth II opened it in the summer of 1970, when it relocated from its temporary lodgings at the East Site. There were joint courses with Mathematics, Chemistry and Engineering as well as Physics degrees. Another “Physical Sciences” block was opened in 1971 and now houses the Centre for Fusion Space and Astrophysics, Theory and Astronomy groups.

8) Maths Research Houses
The Maths Research houses are located on the Gibbet Hill campus, and were constructed between 1968 and 1969. These curvilinear buildings were built to house visiting mathematicians and their families. They were designed by architect Bill Howell, in collaboration with founding Mathematics Professor Sir Christopher Zeeman, and blackboards were introduced to line the walls of these homes. 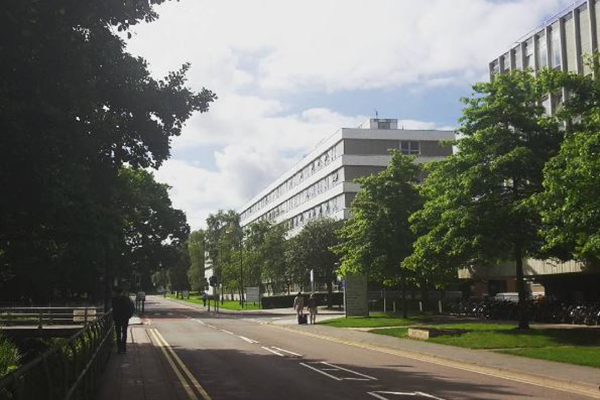 The current Humanities building was originally named the Arts Building when it was built and opened in 1970. The 1973-1974 prospectus boasted a photograph of “The courtyard of the Arts Building” on its cover. It was extended to house the Department of Psychology in 1982.

10) Sports Centre 1971
When Warwick was founded, students joked that the most popular sport had to be tiddlywinks, since there weren’t any sports facilities. They were developed over the next two or three years and the University Sports Centre was eventually completed in 1971. The centre now boasts a Climbing Centre and Bouldering Room, squash courts, gym, strength and conditioning facilities and a swimming pool.

Listen to the IAS podcast here for more on Warwick's development, and stay tuned for the next instalment.

Thanks to Gordon Freeman for sharing his expert knowledge of the University of Warwick, its campus and history.