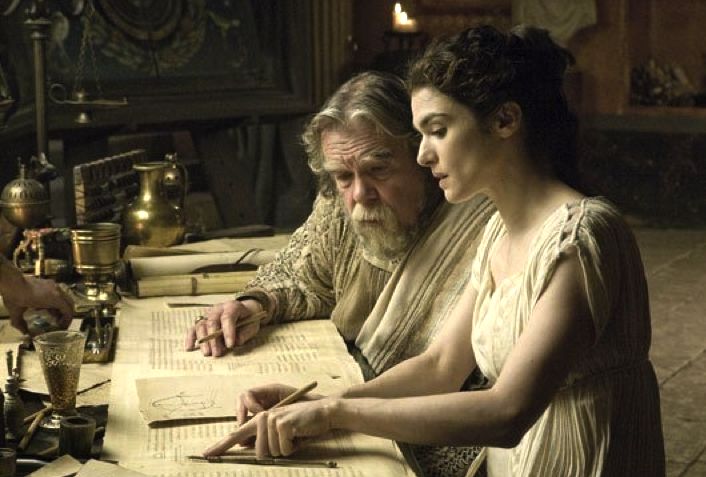 Agora is the story of Hypatia (Rachel Weisz) a real (though scarcely mentioned in the sources) female philosopher and scientist living in Roman Alexandria, trying to balance her studies with the increasingly violent conflicts between Christians and Pagans that gripped the city in the late 4th century.

The subject that consumes most of Hypatia’s time in the film is the study, and her supposed ‘discovery’ of the heliocentric model of the solar system (which did not become well established until the time of Copernicus and Galileo a millennium later). The fact that the film deals with religious themes has meant that the director has taken certain liberties. For instance, Hypatia is presented as an atheist, something much more familiar and easier to relate to for modern viewers than paganism, which would likely have been her historical religious view. Furthermore, the focus on religious conflict may be out of place, historically, because although Hypatia was killed by a Christian mob, one source suggests that the reason for her murder was primarily political, and not religious, as the crowd of Christians blamed her influence on the Roman governor as to why Christians were not politically favoured. In the film, this nuance is removed in favour of presenting a more straightforward narrative about religious fundamentalism.

However, the setting of late 4th century Alexander is presented with laudable accuracy, with the city dressed up with period-accurate Greek, Roman, and Egyptian styles of architecture. The costumes are somewhat less accurate, with Roman soldiers wearing armour that would be more accurate to the 1st century era, sporting leather armour at a time when the Roman military had adopted the chain mail armour that would go on to dominate late antiquity and the medieval period.

Despite the presence of inaccuracy, I think this film is a great watch for anyone looking to see more women-led roles in period fiction set in antiquity. Given the sparse information we have on Hypatia, it was good to see her brought to life in this film with a stunning performance by Weisz. I do think the film is heavy-handed in its exploration of religious themes and conflicts, but I would say it is more an attack on fundamentalism rather than Christianity as a whole, considering there are sympathetic Christian characters and villainous pagan characters, as well as vice versa. While the film is a far-cry from a docudrama, it provides good entertainment if you’re just looking to get lost in the ancient world of Alexandria for two hours.