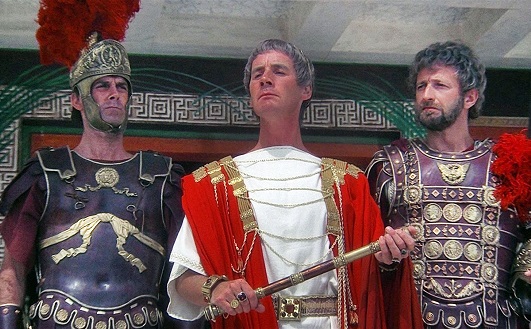 Life of Brian is one of those films that needs no introduction; Monty Python’s ridiculously silly take on the Roman Near East is near-universally known, parodying as it does historical epics, religion, political activism, and even the study of classics itself (‘This is motion towards isn’t it, boy?’). As the title suggests, we follow Brian (Graham Chapman), a Jewish man trying to make his way in 1st century CE Roman-occupied Judea. Born, by coincidence, on the same day as Jesus Christ, Brian grows into a passionate young man and becomes a zealot, joining with the People’s Front of Judea (Not to be confused with Judean People’s Front, or, God forbid, the Judean Popular People's Front) to liberate the Jews from the Roman Empire. Hijinks ensue -- Brian discovers that Biggus Dickus ‘ranks’ higher than any man in Rome; George Harrison is shown to be funding the People’s Front of Judea; Brian is saved from certain death by a timely extra-terrestrial expedition, and Brian is eventually accidentally declared the Messiah, much to his frustration. Don’t go into this film expecting a gripping story; as with Monty Python’s other masterpiece, Monty Python and the Holy Grail, the plot is more of a series of jokes and amusing situations tied together.

Despite having a tone that can only be described as ‘wacky’, the Pythons did not completely do away with historical accuracy. Notably, its comical depiction of the Jewish resistance groups, while being largely a vehicle to mock the sectarianism seen on the British far-left at the time, does reflect the historical situation of the state of Judaism at the time. Zealots, Pharisees, Sadducees, Essenes, and of course the followers of Jesus were all opposing Jewish sects that dominated 1st century Judaea, and this is shown not just in the PFJ scenes but also more subtly, such as when Brian encounters various Jewish preachers on the streets of Jerusalem, hinting at the diversity of religious belief within Judaism.

Ultimately of course, Life of Brian is completely divorced from historical accuracy, and no one would expect it not to be. Despite that, the few nods to the reality of Roman Judea are appreciated and perhaps are to be expected from a group of comedians trained in classical studies (John Cleese allegedly was inspired by his time as a Latin teacher in order to play the Roman Centurion in this film). Although Life of Brian probably won’t educate anyone who watches it, the film will most certainly bring forth a giggle or two, and who knows? Maybe for some people the portrayal of the Roman Empire and resistance to it could begin a life-long interest in Classical studies.