Workshop II of the Academic Network

The workshop intends to investigate the relationship between religious culture and space over the period of 1300-1800. Apart from the question of the extent to which religious culture relies on a clearly defined space, it will focus on the development of church space as a characteristic of Christianity as well as on its design, use, representation and perception to gain insights into changes and continuities in the long-term relationship between space and religion.

Social and cultural studies are experiencing a ‘spatial turn’. Space-related research seems ever expanding: some historians relate macroeconomics and human agency to regional contexts; others focus on micro-spaces like taverns, markets and parish churches; virtual or imaginary spaces (such as Purgatory), too, attract increasing attention. In all of these works, space emerges as a social construct rather than a mere physical unit. Increasing historiographical interest, furthermore, coincides with new conceptualizations of space in the social sciences. In key works such as Martina Löw’s Raumsoziologie (Frankfurt, 2001) or Bernhard Klein’s Maps and the Writing of Space (Basingstoke, 2001), absolute concepts of space give way to more analytical and relational approaches, i.e. a growing awareness that space is socially constructed rather than simply given. These developments form the background for a new collaborative research initiative.

(a) to utilize spatial approaches for a better understanding of pre-industrial Europe;

(b) to advance space-related research more generally through interdisciplinary and international exchange.

The workshop ‘Social Space and Religious Culture’ has a deliberately open structure, which allows a combination of research papers, methodical reflections, conceptual presentations, interpretation of sources (texts or images), and critical commentaries. Participants are free to choose the most appropriate format for their particular contribution. ‘Heretical’ challenges of the spatial turn are equally welcome. There will be plenty of time for discussion, and to identify opportunities and priorities for future research.

Funding: thanks to the generous support of the Leverhulme Trust, the network will reimburse participants for (budget) travel and provide accommodation and catering at Dresden (Thursday to Sunday)

1. Title of contribution and a short abstract (200-300 words, including draft of your conceptual approach): 15 January 2006. Please include a one-page CV as requested by the Leverhulme Trust from all participants (includes title, positions (current & previous), institution, degrees, awards, main publications).

2. 800-word abstract (in electronic format) to be circulated among the participants and for dissemination on the network website: 1 November 2006

For information about the Sonderforschungsbereich 537 ‘Institutionalität und Geschichtlichkeit’ go to:

Recent research has drawn attention to the fact that in pre-modern times churches along with taverns, town halls, marketplaces or ports were public spaces of central importance. In accordance with the concept of the academic network, the workshop will therefore focus on the constitution and use of space at this key religious and social site. It endeavours to analyse the liturgical, architectural and/or artistic creation and arrangement of space as well as issues of social order and conflicts occurring within it. The interior and exterior of buildings will be of interest, their constituent parts as well as whole building complexes (e.g. church and churchyard), as well as the position of the church within larger spatial units. For a fuller understanding of Christian perceptions and ideas of space concepts of non-Christian religious cultures shall be taken into consideration.

Following the latest approaches in the sociology of space, differentiations between place and space, concrete and abstract, ephemeral and institutionalised space will play important roles. As analytical categories the following (mainly binary) terminological abstractions might be of use: public/private, public/exclusive, open/closed, accessible/inaccessible, visible/invisible, concrete/virtual, this life/next world, sacral/profane.

Theological and anthropological approaches may help to elucidate the extent to which religious cultures rely on exactly defined spaces and to understand how church space developed into a specific characteristic of Christian culture; intercultural comparisons (Christianity, Judaism, Islam, Buddhism and Hinduism) could also produce rich results. What types of space are produced in a context of syncretism, may it be successive (like in colonial contexts) or simultaneous? Although societies probably always depend on spatial and topographical order, how exactly does it work within religious movements? Are their meeting places seen as ‘religious’, ‘sacral’ or ‘holy’, and why are they created and considered as such? Are there cultural differences among different religions and (Christian) denominations? Such reflections could also be enriched by the writings of religious ‘free spirits’ such as Sebastian Franck, by tracts on sacral architecture (Leonhard Christoph Sturm, Karl Eusebius of Liechtenstein) as well as Maurice Halbwach’s La topographie légendaire or religio-sociological approaches dealing with religious space. Comparisons with religions whose sacral sites are not ‘closed’ spaces might also yield important insights. Finally, the question of the dissociation of space and religion has to be addressed. Due to the way(s) in which they relate to the ‘next world’, many religious groups seem to have a particular propensity to ‘de-spatialisation’ (‘Enträumlichung’). Hence, do religious cultures facilitate imaginary spaces, spaces of remembrance, ‘loci memoriae’, or ‘Nicht-Orte’ more easily than other, non-religious elements of society?

Constitution and Use of Space

Agency theory argues that spaces are created through both arrangement and perception. Hence, on the one hand, the workshop will explore how ‘religious space’ was created through agents such as architects, parsons, chaplains and parish communities etc. On the other, it will investigate how contemporaries perceived ‘religious space’ of their own and foreign cultures, and why a particular space stood out from others.

Regarding the use of religious space, multi-functionality seems to have been characteristic for the pre-modern period. Within churches, masses, festivities and funerals were celebrated. They served as asylums, courts, and venues for communal assemblies, sometimes even as archives, libraries, market places or (temporary) stables. Prostitutes vied for custom outside church portals, while taverns could be found just a few steps away; in coastal regions or islands church steeples functioned as lighthouses. What conclusions can be drawn from this functional variety? And how was this – from a modern perspective – ‘muddle’ of profane and sacred uses perceived and judged by contemporaries?

Conflicts over the use of space often illuminate the meanings ascribed to it, as when two denominations used the same place of worship, or when parishioners quarrelled about the order in which positions were taken in church; churches did not eradicate social distinctions before God, but often served to highlight them.

Connected to the question of use is that of the public. Were these spaces always accessible, irrelevant of gender, age or other variables? Or were there underlying (hidden or overt) mechanisms aiming at restriction and exclusion and thus promoting social differentiation? Last but not least, religious spaces served as media transmitting a host of messages. Their architectural design and position within their immediate and wider surroundings, as well as their interior design and ornamentation imparted symbols of power, while denominational concepts of piety, reminded the faithful of their appointed place in the great ‘chain of being’ or simply served as ‘Memento Mori’.

‘Religious spaces’ not only include specific sites constituted by architectural, artistic and liturgical means, but also entire building complexes, religious landscapes, and the imaginary spaces of the next world. They can be unpretentious buildings such as chapels, oratories, or elaborate palaces; open spaces such as deserts, or devotional retreats in woods and remote mountain valley.

The size and designs of holy buildings does not necessarily depend on religious or denominational impulses, but may derive from political rules such as those articulated in the conditions of exercitium religionis publicum/ privatum in the Peace of Westphalia. Yet concrete space always relates to its surroundings in the village, town, country or wider setting; we might think of rituals such as perambulations around the open fields for communal as well as religious reasons, namely for promoting the communal good by securing divine protection for the harvest. It can also be linked to an imaginary and invisible ‘next world’ represented and visualized in the church building. The Catholic Baroque was especially keen on creating ‘new’ topographies by equipping whole landscapes with crosses, shrines, chapels, statues of saints and votive tablets – some towns were even proclaimed as ‘holy sites’ or the New Jerusalem.

Neither these spatial creations, nor interregional networks forged between Anabaptists or Calvinists, were the result of explicit theological directives. Religious spaces thus appear to possess different levels of ‘holiness’: from the ‘most sacred’ to the more profane.

Changes in the Relation between Space and Religion

Finally, we must draw attention to the evolving relationship between space and religion over the period of 1300-1800. According to a conventional (central-European) perspective, piety flourished in the later Middle Ages, resulting e.g. in increasing numbers of altars and (private) chapels. This could be interpreted as a decentralisation of church space at a time when clergy and laity drifted apart. In the Reformation period, iconoclasm partially ‘purified’ ecclesiastical buildings. Denominational tensions, particularly in simultaneous churches, could result in de-sacralization, while confessional groups evolved new concepts of space: centralisation (on the pulpit) in Protestant sites of worship, or more transitory spatial arrangements in Tridentine Catholicism under the influence of mysticism and other devotional practices. This ‘sacral re-charging’ of religious space, however, was not immune to the general process of secularization, what Weber called ‘Entzauberung’. A preliminary boundary might be drawn around 1800, when the state not only appropriated church property and possessions – as in the Reformation period – but also sold them, suppressing religious space by converting it into private property. Intercultural comparisons might reveal whether this periodisation has a more general validity. 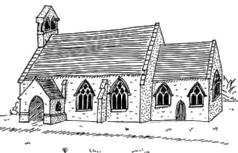