The Arts Faculty Award recognises the achievements of Warwick's outstanding educators who have enabled excellent learning, creating the conditions within which all students are supported and empowered to succeed and thrive.

My experiences as a student continue to inform my teaching practice. Central to this is my reliance on humour as a pedagogical tool – as noted in multiple research papers, laughter can create a welcoming and relaxed atmosphere in which students can confidently express themselves and interrogate their own preconceptions. I take my students’ learning seriously while approaching it lightly, and my caring, attentive and fun practice uniquely enables my students to grow as individuals, scholars and artists.

Ian is an IAS Early Career Fellow and tutor in Theatre and Performance Studies. His thesis (completed in 2021 and funded by the Wolfson Foundation) explored British theatre and science fiction. Ian was a finalist for the 2021 WATE PGR and is delighted to be a WATE PGR winner.


My teaching ethos, methods, and experiences traverse disciplinary boundaries across both Theatre and English. I teach first-year Theatre students and my work on ‘Your Theatre and Performance Toolkit’ has had positive impact upon their learning. My signature pedagogy on the module ‘Remaking Shakespeare’ is open-space learning (OSL), and more recently I have run a collaborative workshop for the Resonate Festival with students and professional theatre-makers.

Ronan teaches at the University of Warwick and NYU London. He is also a theatre-maker and Artistic Director of Partners Rapt. Ronan is currently co-writing Shakespeare and Hip-Hop: Adaptation, Citation, Education, co-editing Shakespeare and Biofiction on the Contemporary Stage and Screen and developing a monograph on the Reduced Shakespeare Company.


In my teaching I bring both my research interests and industry experience to the table to create engaging, relevant and challenging sessions for my students in modules that have appropriate and authentic assessment methods. I am passionate about developing students who have their fingers on the pulse of current debates, research and the industry. However, I believe that ‘being an ‘excellent teacher’ means more than being effective in the classroom’ (Mortiboys, 136). I hope that I can have a long-term impact on my students and the ethos of my department through championing the importance of the wider university student experience; better embedding wellbeing, careers, industry, employability, and skills within the curriculum; and collaborating with students to foster a meaningful sense of community in Theatre and Performance Studies (TPS).

David is an Assistant Professor in Theatre and Performance Studies. He teaches and researches nineteenth century theatre history, historiography, and queer theatre. As well as teaching core and specialist modules in the department, David has designed a skills-focussed programme for first year undergraduate students and an industry-focussed module in collaboration with Warwick Arts Centre.

Dr Julia Peetz, our Leverhulme Early Career Fellow, has been nominated for the prestigious TAPRA prize for her article 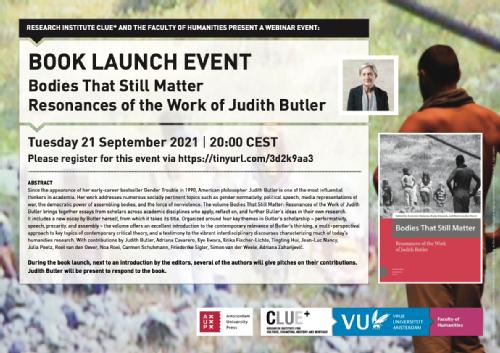 Dr Julia Peetz has published a chapter in the new volume Bodies that Still Matter: Resonances of Judith Butler. The book was published in July and a formal book launch will take place online on Zoom on 21 September 2021 at 20:00 CEST. The book has contributions from Butler herself, as well as Jean-Luc Nancy, Erika Fischer-Lichte and many others. You can find out more about the volume here and you can book a place at the virtual book launch using this link.
Fri 03 Sep 2021, 12:02 | Tags: Publications Research Dr Julia Peetz

Julia Peetz to edit issue of Performance Research 'On Protest'

Julia Peetz is editing an issue of Performance Research 'On Protest' with former Head of Department, Prof. Andy Lavender. Their call for papers is out and can be found below:

Storming the Capitol. Dismantling Confederate and slave trader statues. Refusing to wear a mask. Booing Belarusian President Alexander Lukashenko. Sabotaging 5G towers. Buying stamps in an attempt to prop up the United States Postal Service. Defying lèse-majesté laws to criticize Thai royalty. Writing ‘Black Lives Matter’ on roads, so large that the message can be read from Earth orbit. All these actions have been performed as protests in 2020 and 2021, marking this as a year of significant dissent. In the United States alone, the Black Lives Matter actions may be the largest protest movement in the country’s history, eclipsing even the protests of the civil rights era. The US presidential election, meanwhile, was a site for trenchant protests that dramatize the situation of commitment-amid-division that protest typically represents—and that beg wider questions of protest as a contemporary mode of political insistence.

While many of the recent protests around the world mark a resurgence of the popular voice, the language of resistance and opposition has become ubiquitous on the political right as well as for progressives. Right-wing populists paint themselves as perennial outsiders, embattled by and protesting against deep state powers and global cabals. Protestors have weaponized ideals of personal freedom to rage

against COVID-19-specific health guidance regarding the wearing of face coverings in public. Social media are increasingly sites of and means of coordinating protest actions; even so, social media posts framed as protest actions are frequently denounced as merely ‘performative’ forms of protest and allyship. Debates on the correct and most effective manner of performing protest abound, and once-controversial civil rights heroes are invoked as exemplars of ‘right’ and ‘wrong’ ways to protest. Protest has mainstreamed, and it has become more volatile. It belongs not to any single faction or persuasion but has become pervasive—even while it is fostered as part of the repertoire of political sway, a system-theatre of power.

This issue calls for critical examinations of contemporary performances of protest across the globe. It is interested in ways that protest can be understood as theatre, but more particularly—in a multimodal, interconnected environment—as a form of public manifestation that draws upon a wide repertoire of representational devices. It seeks to address the relationship between embodied action, affective presence, communication and ideological affiliation. How does protest feel, and who is doing the feeling? It considers the performativity of protest. It pays particular regard to the extent to which protest achieves change (however this is defined) and the ways in which historical protests help to inform judgements of the conduct, legitimacy and efficacy of current protest actions. What historical instances are invoked to draw comparisons to current forms of activism and resistance? How do contemporary protests draw on historical repertoires of protest that reflect or extend beyond their specific political contexts? Do protest strategies and tactics need to evolve as languages of protest become a default mode of mainstream political discourse? Our concern with the modal nature of protest, we suggest, might also be historicized. What is it about our times, our modes of communication, our political systems, that help to produce protest as a defining feature of contemporary political process?

We invite contributions in the form of longer essays (up to 7,000 words), shorter provocations (2,000 words) and artist pages. We also welcome suggestions for unique or hybrid formats.

Contributors may wish to draw on the following list of topics as a source of inspiration, although the list is not intended to be exhaustive or restrictive.

ALL proposals, submissions and general enquiries should be sent direct to the PR office: info@performance-research.org

Issue-related enquiries should be directed to the issue editors:

We are delighted to Welcome Dr Julia Peetz to the department who has been awarded a Leverhulme Early Career Fellowship.