TOP STORY: SCUDD 2021 Conference will be hosted by Warwick

The aim of this conference is to bring together artists, academics, and students to think together about the politics of inclusion: its opportunities, challenges, and limits. The conference begins with a sense that institutional work on diversity and inclusion has tended to rearrange the deckchairs but leave the ship intact and on course for disaster. This conference seeks to identify and interrogate inequalities of access, safety, and opportunity across experiences of exclusion. The purpose here is to identify both the specificities of lived experiences of structural and systemic exclusion but also to look across exclusory practices and phenomena to build resistive solidarities. Moreover, the conference will debate what it might mean to shift the conversation away from inclusion, which retains a sense of the centre enveloping the margin, and instead think through the possibilities for our campuses and our industry to become sites of anti-exclusion.

The Standing Conference of University Drama Departments (SCUDD) represents the interests of Drama, Theatre and Performance in the Higher Education sector in the UK. SCUDD acts as a mediator with bodies such as funding councils, the AHRC and the Arts Councils and is consulted by such organisations when matters of future policy are discussed and decided. Its annual conference concerns topics, issues and debates relevant to those working in drama, theatre and performance in HE. This year’s conference will make space for reflections on working in our field during covid-19 and will continue discussions around advocacy for - and threats to - the discipline. As part of the conference, SCUDD’s AGM will take place. The conference will be free to attend. 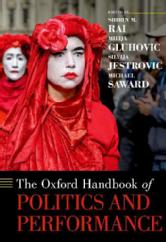 Congratulations to Prof. Silvija Jestrovic and Dr. Milija Gluhovic on the publication of the their Oxford Handbook of Politics and Performance.

Prof. Silvija Jestrovic has been appointed as Senior Editor for Theatre Research International 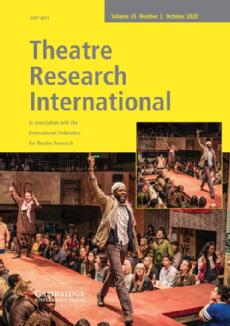 Congratulations to Prof. Silvija Jestrovic who has been appointed as Senior Editor for IFTR's (@iftrcomms) Theatre Research International (@theatreintl). Theatre Research International is the leading academic journal for Theatre and Performance Studies scholars. It publishes articles on theatre practices in their social, cultural, and historical contexts, their relationship to other media of representation, and to other fields of inquiry. The journal seeks to reflect the evolving diversity of critical idioms prevalent in the scholarship of differing world contexts.

Applications are now open for an Associate Editor to work alongside Silvija for the duration of her tenure from 2021 to 2024.

Collaboration between: School of Arts and Aesthetics, Jawaharlal Nehru University, Department of Theatre, University of Ottawa, Theatre and Performance Studies, University of Warwick

The last decade has seen the rise of a range of social and political movements across the globe that have challenged the existing boundaries and imaginations of political and legal articulation of rights and justice, and notions of development. At the heart of these developments has been the interlinked phenomenon of populism and performative paradigm of politics that is based on a complex relationship between digital presence and bodies physically assembling in space. Taking forward the earlier collaborative projects between the universities, namely, the Gendered Citizenship: Manifestations and Performance and Cultures of the Left: Manifestations and Performance, the present conference foregrounds theatrical/performance exchanges and the need for cross-cultural dialogue and theorisation in re-examining populism. Opening up a dialogue on the under-explored Indian-Canadian experience, the conference seeks to explore the challenges to the practices of democracy and the potential of performance to offer alternative ways of reorganisation of the world.

The performance studies framework of the conference provides an interdisciplinary exploration of cross-cultural patterns of performance and the performative nature of political dissent, bringing together seemingly diverging experiential realms. It brings together the popular cultural performances and the practices of assembling and choreographing of bodies in the streets as well as in digital space. It also offers a lens to understand what might not otherwise be deemed as public displays, whether it be dissent and protests or ways of care of self and others as vulnerable bodies or not deemed to be able-bodied to articulate politics by the mainstream. The contemporary context of Covid19 pandemic has further brought into relief the specific challenges to understand the performative paradigm of politics. The conference takes the intense moment of pandemic looking both synchronically and diachronically into the practices of democracy, and what past experiences might have to offer to the languages and gestures of democratic practices in the contemporary. In doing so, the conference will foreground an aesthetic of resistance not only as a reactive practice, but as a way to sustain articulation of rights and the politics of inclusion, equality, care for the commons and social justice.

Click the link above to see the event's schedule.

On 4 February 2021 the Leamington Observer reported that the Talisman Theatre in Kenilworth had reflected on its whiteness, and has reaffirmed its commitment to diversity. This commitment has included partnering with Dr Yvette Hutchison's African Women Playwrights Network so that it can begin to change its position as a venue which has 'a very white membership, choosing plays mainly about white people, by white authors, presented to a mainly white audience' (Leamington Observer).