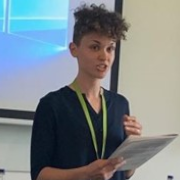 Arianna holds a BA in Foreign Languages and Literature from the University of Milan, a BA in Music from the Conservatorio G.Verdi of Milan, and a MA in European and Extra-European languages and literature from the University of Milan. She joined the University of Warwick as a PhD candidate in the Department of English and Comparative Literary Studies in 2018, and in 2019 she joined the School of Creative Arts, Performance and Visual Cultures. Her doctoral research in Translation Studies was funded by CADRE and supervised by Chantal Wright (SCAPVC – Warwick Writing Programme) and Christina Britzolakis (Department of English and Comparative Literary Studies). She submitted her thesis in June 2022. Her doctoral thesis is inherently interdisciplinary, as it brings into dialogue Translation Studies, Literary Studies, and Music Studies to devise an interpretive translation approach to James Joyce’s “Sirens”, Ulysses. Her research interests are likewise interdisciplinary and include Literary Translation (theory and practice), Word and Music Studies, Music Theory, James Joyce, Modernism, and Experimental Writing.

Arianna’s doctoral research endorses the existing arguments (Scott 2000; 2012a; 2018; Venuti 2013; 2019; Reynolds 2019) that the traditional understanding of translation as a ‘faithful’ transposition of the ‘meaning’ of the source text (ST) into the target text (TT) needs to be challenged in favour of an understanding of translation as a more visible act of interpretation, especially in a re-translation context and in addressing a text such as James Joyce’s Ulysses. Specifically, in her thesis, she investigates how translation can serve as a critical tool in addressing Joyce’s famous musical episode, “Sirens”, which Joyce claimed to have written imitating the musical technique of the fuga per canonem (JJ, 462). The purpose of her doctoral research can be described as twofold: i) to support the idea that translation is an interpretation whose necessary partiality can be turned into a value by the translator adopting a more visible stance and through informed readings of the ST and literary criticism thereof ii) contribute to the many studies on musicality in Joyce’s prose (e.g. O’Callaghan 2009; Witen 2018) from the performing standpoint of the translator – a reader whose “linguistic experience” of the source text can be “performed” in the target language (Scott 2012a, 2012b). In this context, her thesis aligns with recent developments in Translation Studies that dismiss translation’s traditional ancillary role, arguing instead that translation can contribute to or complement literary criticism itself (Gaddis Rose 1997; Scott 2000; 2012a; Wright 2016), with translation research in Joycean Studies (Senn 1984; O’Neill 2005), and with recent developments in Word and Music Studies (Arroyas 2001; Bernhart 2011; Wolf 2015).

In her future research, she is interested in investigating experimental literary translation and theatre translation practices by modernist and postmodernist experimental writers and playwrights, with the aim of compiling an alternative translation history that can account for and re-establish the historical value of creative translation approaches, currently under- or mis-represented in history textbooks that set the dominant narratives in Translation Studies. The final aim of her future project is to assess how current experimental endeavours in Translation Studies – the “creative turn” in the discipline (Loffredo, Perteghella 2006, 11) – can be seen as part of a trajectory in history rather than as an isolated development in the field. This project relies on interdisciplinary methodologies and brings together Translation Studies, Literary Studies and Performance Studies.

At Warwick, she took part in the APP:PGR programme (Academic Development Centre at Warwick) on teaching pedagogy, receiving the Associate Fellow of the Higher Education Academy certificate on completion in 2021. In her teaching practice, Arianna promotes inclusivity and equality among students of all genders and races. She brings into the classroom an anti-hierarchical praxis, and, based on recent pedagogical studies, promotes student-led interactive learning.

Arianna joins IATL in October 2022 after being awarded the IAS-IATL Early Career Teaching Fellowship in May 2022. During her time at IATL, Arianna will develop both her teaching and research profile.

As part of her research development, Arianna will write some journal articles that summarise the main results of her PhD research and will work towards the publication of her complete doctoral thesis with an academic publisher. At the same time, she will complete some postdoctoral applications, working in collaboration with IAS (Institute of Advanced Studies at Warwick). As part of her teaching development, she will shadow one IATL undergraduate module and take part in further teaching training programmes, improving her interdisciplinary approach to teaching. She will also conduct a series of interventions as part of a non-modular teaching project on the topic of “How to read in translation”, which will interdisciplinarily explore the challenges of reading in translation, and will help students to develop reading skills for translated texts, skills which will be useful both for their research and for their life outside academia.