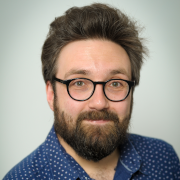 As an undergraduate tutor in Theatre and Performance Studies, and an Associate Fellow of Advance HE, Ian is a passionate and dedicated teacher. His engaging, down-to-earth and always fun practice has seen him repeatedly nominated by students for the Warwick Awards for Teaching Excellence, for which he was a finalist in 2021 and a winner in 2022. He is extremely keen to expand his teaching experience through IATL’s interdisciplinary modules and networks.

Prior to teaching at Warwick, Ian joined the university as a postgraduate student in 2016. He was awarded the degree of Master of Philosophy during examination of his MA by Research thesis. He began his PhD in 2018, having been awarded a scholarship from the Wolfson Foundation. Successfully defended in 2022, his thesis explored contemporary British theatre and science fiction. Drawing on a number of practitioners including Caryl Churchill, Alistair McDowall, Unlimited Theatre, Edward Bond, Tajinder Hayer, RashDash and Dawn King, his research identified the themes and images of science fiction as an emergent, highly effective political performance tool which enables audiences and creatives alike to critically intervene on the most urgent social, economic and ecological issues of the twenty-first century. Ian is currently drafting a monograph based on his thesis, which is under consideration by Methuen.

Alongside his research, Ian has published articles in Contemporary Theatre Review, Foundation, Theatre Journal and Studies in Theatre and Performance. He has also contributed chapters on theatre and science fiction to edited collections including Sci-Fi: A Companion (2019) and the upcoming Edinburgh Companion to Science Fiction and the Medical Humanities (2023). He continues to expand his research activities through IAS, including planning a conference on performance and the fantastic for 2023. Beyond this, Ian is interested in the relationship between performance and work, especially in the retail and hospitality sectors. Having worked in various customer-facing jobs in the past decade, Ian is hoping to explore the performative, emotional and aesthetic labours involved in such roles.

Ian is also an avid (if average) bird photographer and can often be found in the greener spaces on campus, squinting upwards.