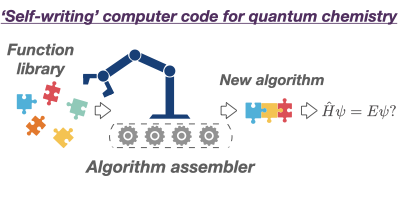 A new paper by Prof. Scott Habershon has shown how program synthesis, or the concept of 'self-writing code', can help invent new algorithms which solve the time-independent Schrodinger equation, a key equation used to make predictions about the properties of molecules. Given a library of mathematical functions, an `algorithm assembler' constructed new algorithms and then tested them to see if they reproduce the correct ground-state wavefunctions in a set of problems for which the correct answers were already known. By gradually improving the constructed algorithms, the `algorithm assembler' learnt how to generate new algorithms which could not only solve the training problems, but could also solve previously-unseen problems too. Although this scheme has only been tested for simple 1-D and 2-D models representing the vibrational motion of simple molecules, this general algorithm discovery strategy has lots of potential future applications, including more accurate energy calculations to improve predictions of reaction rates, better algorithms for modelling molecular dynamics after light absorption, or new strategies for long-time simulations of protein dynamics.