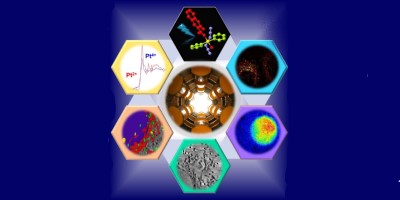 Platinum(II) agents cisplatin, carboplatin and oxaliplatin are the workhorse of cancer chemotherapy, but suffer from severe side effects which limit their clinical utility. Photoactivatable platinum(IV) diazido complexes are stable in the dark, but can be photodecomposed by visible light irradiation, to generate cytotoxic species selectively at the tumour site. Their ability to provide spatial and temporal selectivity for cancer tissue can be particularly useful in the treatment of localised cancer.

The photodecomposition properties of these agents have been investigated by NMR, Mass Spectrometry and other analytical techniques, showing photoreduction to Pt(II) species and release of radicals upon irradiation in aqueous solution or simple model systems. However, determination of the behaviour and photodecomposition properties inside cells is more challenging and unattainable with standard analytical techniques.
In this paper, which involved an extensive collaboration between Warwick and Diamond Light Source’s investigators, we have used a combination of synchrotron techniques, to elucidate the intracellular behaviour of photoactivatable Pt agents inside cells and how this is influenced by light irradiation. Using Soft X-Ray Tomography (SXT) we discovered that photoactivation of these agents induces remarkable cellular damage with extreme alterations to multiple cellular components, including formation of vacuoles. At the same time, using nanofocussed X-Ray Fluorescence (XRF), we showed that light irradiation dramatically increased the cellular accumulation of Pt species compared to dark conditions. Both SXT and XRF highlighted the heterogeneity of the cell population emphasising the importance to look at biological behaviour using single-cell rather than bulk techniques.
Photoreduction inside cells was observed for the first time using X-ray absorption near-edge structure (XANES), but intriguingly, only a partial reduction to Pt(II) species was measured, suggesting that both Pt(II) and Pt(IV) species may be involved in the photocytotoxicity of Pt(IV) diazido agents. Overall, this project highlighted the utility of cutting-edge synchrotron techniques to study the behaviour of metallodrugs, and particularly photoactivatable agents, in biologically relevant systems and their potential to inform and accelerate metallodrug design and translation.