Every year, the Faculty of Science, Engineering and Medicine, and the School of Life Sciences, jointly run a PhD Thesis Prize competition with prizes provided by each. Supervisors are invited to put forward students for consideration.

This year, the winner of the Faculty Thesis Prize is Dr Fábio Henrique dos Santos Rodrigues, who did his PhD with Prof John McCarthy. The thesis title is 'Targeting trypanosomatid translation factor interactions'. The work has been published in a joint first author paper in Nucleic Acids Research.

The winner of the School of Life Sciences Thesis Prize is Dr Jenny Goodman, who did her PhD with Dr Alex Jones. Jenny's thesis is entitled 'The role of Feronia in regulating growth and development in Arabidopsis Thaliana roots'. A methods paper and a middle author paper have already come from the PhD, and two first author papers – including one for PNAS – are in process.

The University of Warwick has been named as one of the UK’s top ten, and one of the world’s top 100, universities by the QS World University Rankings.

Bacteria such as E. coli detected in minutes by new technology

Dr Munehiro Asally, Dr James Stratford and colleagues, showed that bioelectrical signals from bacteria can be used to rapidly determine if they are alive or dead.

The findings offer a new technology which detects live bacteria in minutes instead of waiting for lab-test results which can take days.

When 'zapped' with an electrical field, live bacteria absorb dye molecules, causing the cells to light up and allowing them to be counted easily.

Examples of talks from Life Sciences

Who discovered DNA? Well, the double act Watson and Crick - right? Well, not according to Kevin and Robert, who will introduce you to a host of “lesser known” pairs that helped to pioneer the discovery, sequencing and understanding of DNA. Exploring historical events, the 100,000 Human Genome project and beyond; this talk literally has “something for everyone” as genetic research paves the way to personalised medical treatments. Even DNA likes a companion – just look at its structure! So, why not bring a friend and come along to find out more about DNA, and who really did discover it!

Nurturing nature – 20 May 7:30-9:30pm - a series of three talks including:
Amy Newman (PhD Student, University of Warwick) - More than dirt: the hidden world under our feet

Many of us give little thought to the soil beneath our feet but it's vital for all life on earth. Amy's talk will unearth some fascinating examples of the microscopic life that's living all around us. Come along to find out about the microbes which helped to create the first plants to colonise the Earth's surface millions of years ago, and to hear about recent advances in scientific methods which show exciting potential for the discovery of new chemicals such as pharmaceuticals.

Self-lighting Christmas trees could be the future 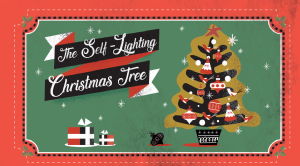 Say goodbye to tangled up Christmas lights, as self-lighting Christmas trees could be the future thanks to scientists from the Warwick Integrative Synthetic Biology Centre (WISB) using VR.

Professor Christopher Dowson has been awarded a Medical Research Council (MRC) grant of £3million to run a three year China-UK AMR Partnership Hub alongside the Chinese Academy of Sciences. The award is part of a project to address antimicrobial resistance in China and support the global fight against superbugs. 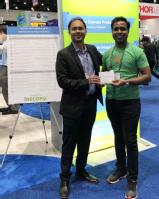 Dr Amol Bhandare was awarded a $250 Tech Award from Inscopix at the recent Society for Neuroscience's (SfN) 48th Annual Meeting in San Diego, USA. Inscopix is a discovery phase neurotechnology company in Silicon Valley, California which brings together expertise in neuroscience, physics, engineering, and data science and is developing radically new approaches to understanding the brain in health and disease.

The Inscopix Tech Awards are an initiative to encourage graduate students and postdocs to present their research at SfN. Dr Bhandare received the award for his abstract on Central circuits for CO2 chemosensory regulation of breathing in freely behaving mice.

A team led by Dr Christophe Corre (SLS) and Dr Manuela Tosin (Chemistry) have characterised a new bioactive natural product whose derivatives could be used as antibiotics and help fight infections.

The School of Life Sciences achieved a Silver Athena SWAN Charter Mark in the 2018 submission round. The charter mark is an important indicator of work undertaken to address gender equality in academia and professional and support roles.

In the same round the University retained its Silver award and Politics and International Studies (PAIS) received a Bronze award. 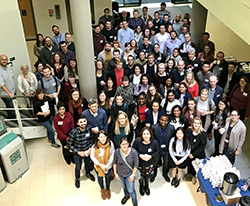 On 13-14 September, the University of Warwick hosted the 5th annual M4 Midlands Microbiology Conference organised jointly by Dr Freya Harrison, Dr Yin Chen and Profesor David Roper in SLS as well as Dr Meera Unnikrishnan, and Dr Chrystala Constantinidou, from WMS. The conference attracted over 140 participants from throughout the UK with outside speakers from the Pasteur and Karolinska Institutes, and featured a wide breath of microbiology from environmental phage biology to the influence on the bacteria cell wall in host physiology. Microbiology research at Warwick featured prominently at the conference including poster prize winner Carmina Micelli as well as the Antimicrobial Screening Facility which is a unique facility in the area supporting academic and industrial requirements. The conference was sponsored with generous support from the Microbiology Society, The Company of Biologists and Society for Applied Microbiology as well as a number of exhibiting companies.

Survey results out recently reflect very positively on the School of Life Sciences. These surveys reveal student perception of study here in Life Sciences and also what graduates go on to achieve. We are pleased to see the satisfaction our students show with their education at Warwick. We greatly value their feedback and respect their judgement.

DLHE (Destinations of Leavers from Higher Education) surveys graduates 6 months after graduation to find out whether they are in work or further study. The recent 2017 results are excellent for Life Sciences with 96% of UG graduates in work or further study (up from 94% in 2015) and 88% in graduate level work or study (up from 79% in 2015). The Government’s 2018 Longitudinal Education Outcomes (LEO) show that Warwick's Life Sciences graduates are ranked in the top 10 in the UK for high earnings five years after their graduation.

It is great to see the work that goes into planning and delivering these degrees by so many people in the School, has such a positive impact on students. 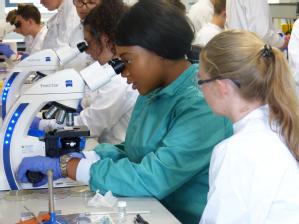 This week the School of Life Sciences is welcoming students from across the UK as part of the 2018 Headstart Programme.

Taking place at the Gibbet Hill campus 15-19 July, the Headstart course provides a university taster course for 16-17 year olds with the opportunity to explore the different biological disciplines taught within the School of Life Sciences. The Life Sciences course enables students to gain experience at a prestigious university prior to making UCAS applications, showing them the different courses and career paths available.

Across the week, students will take part in a wide range of hands-on laboratory experiments and lectures including physiology, microbiology, cell biology and molecular biology.

Organised by the EDT (Engineering Development Trust), Headstart has been established for more than 18 years as a charitable trust providing hands-on Science, Technology, Engineering and Maths (STEM) activities and taster courses to encourage young people into technology-based careers.

Enzyme discovery could help in fight against TB

An enzyme structure discovery made by scientists at the University of Warwick could help to eradicate tuberculosis (TB).

Research by a team led by Dr Elizabeth Fullam, has revealed new findings about an enzyme found in Mycobacterium tuberculosis (Mtb) the bacterium that causes TB. TB causes more deaths than any other infectious disease, including from HIV and malaria.

The Conference will present cutting-edge research on molecular and cellular microbiology. A wide range of topics will be covered, ranging from biofilms, quorum sensing, pathogenicity islands, host-pathogen interactions and antimicrobials.

The goal of this conference is to act as a conduit for fostering collaboration across Midlands and nationally among leading scientists and to promote the exchange of ideas between the next generation of molecular microbiologists. The conference will offer early career researchers an opportunity to present their research and connect with other scientists.

University of Warwick ranked 4th in UK for Bioscience

The Guardian University league table has ranked Warwick 8th in the UK for 2019, maintaining our position from 2018 and ranking the University top in the West Midlands. The new table is published today, Tuesday 29 May, 2018.

These results provide recognition of Warwick's excellence in teaching and research.

New academic appointments in the School of Life Sciences

The School of Life Sciences invites applications for four new academic positions to strengthen key research areas in the School. This is part of our strategic growth on the Gibbet Hill Biology campus, supported by investment in a new Interdisciplinary Biomedical Research Building that will bring together researchers from Life Sciences and Warwick Medical School to understand the origins and mechanistic basis of diseases.

The public science festival, Pint of Science, is coming to Coventry for the first time this year, with experts from the Universities of Warwick and Coventry talking about their research work in a selection of pubs and venues around the city.

There are a number of talks from researchers in the School of Life Sciences:

14 May - Life is the name of the game
Professor Chris Dowson on 'Antibiotic Resistance: No drugs, bad bugs'

15 May - Drink, Drugs and Sunscreen
Professor Kevin Moffat on 'The life of fly - alcohol, sex and violoence!'