My main research interest is in the study of distant galaxies, taking a multi-wavelength approach to explore different components of the galaxies and the nature, lifetime and behaviour of star formation at early times in the universe. This can be divided into a number of interwoven subprojects.

Working with J J Eldridge (Auckland, NZ), I have developed a framework for incorporating massive stars, and in particular their binary evolution pathways, into a spectral synthesis code. We originally used this code to study the massive stellar populations of distant (z>2) galaxies by comparing model rest-UV and optical spectra to those observed. The models have now become far more generalised and aim to reproduce the evolution of simple stellar populations across a wide range of redshifts and metallicities.

Our recent work has focussed on the behaviour of old stellar populations, initial mass function variations and supernova progenitors. We are currently working towards reproducing the non-stellar components of a galaxy and calculated its integrated light.

Observations of the highest redshift galaxies play a central role in developing an understanding of how galaxies form and how they relate to the development of structure in the young Universe. In the past few years it has become possible to identify strongly star forming (Lyman break) galaxies at z=5 and above based on multiband photometry and follow-up spectroscopy. These galaxies are identified through the presence of a strong spectral continuum break caused by absorption shortwards of 1216 angstroms by intervening neutral hydrogen. Shortwards of this break galaxies appear to 'drop out' of observations, in the R-band at z=5, the I-band at z=6 and the Z- or Y-band at z=7. In collaboration with Malcolm Bremer (Bristol), Andy Bunker (Oxford), Steve Wilkins (Sussex) and others, my work has helped to identify and characterise the galaxy population revealed using this method. We are also extending this work to explore clustering both at high redshift (e.g. Husband et al 2013) and at intermediate redshifts (e.g. Davies et al 2014).

My recent work has included studying the properties of compact, intensely star-forming galaxies in the local universe that provide good analogues to the high redshift population - and, in particular to the highest redshift galaxies. Understanding the nature of star formation at early times requires inferences and assumptions about their wider properties, extrapolated from relatively little data. Inevitably, these extrapolations are based on studies of similar, small, star-forming galaxies in the more local Universe, including so-called 'Lyman Break Analogues' and more local Gamma-Ray burst host galaxies (which can be used as models for more distant burst hosts). By examining these nearby sources, we aim to study the spectra, stellar populations, mass and dynamics of such systems in more detail than is possible on faint, distant galaxies. Our initial pilot sample was published in Stanway & Davies (2014), and follow up observations at LABOCA, SINFONI and the VLA are underway. My PhD student, Stephanie Greis, worked in this area (see Greis et al 2016, 2017). 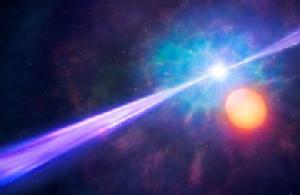 In collaboration with Andrew Levan (Radboud), Malcolm Bremer (Bristol) and Nial Tanvir (Leicester), I am also using my expertise in distant galaxies and in radio observation to study GRB host galaxies - both to constrain their star formation properties using radio observations, and to study their molecular gas content at very high redshift). To date we have explored molecular gas in the field of a z=8 GRB Host galaxy (Stanway et al 2010b) and the radio continuum flux of GRB host galaxies at very low redshifts (Stanway, Levan and Davies, 2010), and are expanding this work to consider specific categories of GRB hosts at intermediate redshift. Recent work has included the publications of my PhD student Ashley Chrimes: Chrimes et al (2018, 2019a, 2019b, 2020) which has characterised host galaxy populations, identified a z>4.5 burst in the archive and explored progenitors of these events using the BPASS models described above.

An association between sub-millimetre, active and star forming galaxies is now observationally well established. Each population traces peaks in mass density distribution, and different components of the underlying baryon distribution. As a result, any attempt to establish the physical conditions of star formation, its efficiency and its feedback on its environment must survey more than one type of emission, or be hopelessly incomplete. Observations at these long wavelengths are limited by the atmosphere, and by technology that lags behind optical telescopes in its sensitivity. As a result, work to date has been limited to bright, intrinsically-blue star forming galaxies. Older, dusty or less vigorous galaxies (which are redder) have been missed. In the next five years, new instruments and telescopes are going to change the way we look at the early universe, and let us explore properties of distant objects that have hitherto been invisible. Key amongst these are a radio telescope, ALMA, and the successor to Hubble, JWST.
Together with collaborators, I have begun to explore distant galaxies both in molecular gas (e.g. Stanway et al 2008, Davies et al 2010) and in the dust continuum (e.g. Stanway et al 2010, Davies et al 2012, 2013). I also identified a rare molecular gas detection in a GRB host galaxy (Stanway et al 2015)