Thirty pupils from year 5 and 6 began by defining the mandatory boat requirements, sketching designs and making card prototypes. A risk assessment was 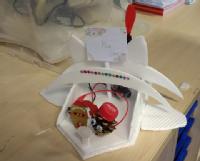 undertaken and then a special floatation exercise. After morning break the children assembled their circuits, making sure to give the electrons some work to do in the motor and avoid a short circuit. The morning session was completed by cutting out the boat parts from polystyrene sheets and assembling them at the hot melt glue gun station. Well done Mr Davies for managing the orderly sharing of half a dozen hot melt glue guns between 30 children!

After a well-deserved lunch it was time to fill up a couple of paddling pools and perform a trial sail. None sank, all carried their

pine-cone “Captain Dojo” passenger and, after considering the fan direction and blade profiles, all boats went forward too!

Pupils wrapped up the afternoon by critiquing their designs and reflecting on learning throughout the day. Afterwards, Juliette and Antony were put under intense interrogation, with the pupils asking probing questions on their engineering careers, electric smart cars, record breaking trains and the potential for solar powered flight.

A few days later some of the pupils then, much to the delight of their friends, showed off their creations in a boat race demo at a whole school assembly.

Materials for the boats were provided by the Institute of Mechanical Engineering, and the day was deemed so successful that we have been invited to run two similar sessions at partner schools.