Ken Binmore - one of the world’s leading game theorists, a founder of the modern economic theory of bargaining, and a pioneer of experimental economics – presented a withering critique of the state of the economics profession Tuesday in a University of Warwick lecture jointly hosted by the Department of Economics and DR@W.

Using colourful language, Binmore described certain members of the profession as evil and summed up certain papers as nothing more than a lie because of the dishonest methodology underlying the research.

“This is standard behaviour in economics,” he said Tuesday. “We should be more proud of ourselves.”

Binmore’s lecture touched on the themes he raised in a controversial and scathing review, “Experimental Economics: Where Next?,” published in 2010 in the Journal of Economic Behavior & Organization. The article, written with Avner Shaked, heavily criticised an influential paper by Ernst Fehr and Klaus Schmidt as an example of poor science. In the article, the authors, wrote, “we urge experimentalists to break with the less respectable traditions of economic debate and join the rest of the scientific community in adopting a more sceptical attitude when far-reaching claims about human behaviour are extrapolated from very slender data.”

In Tuesday’s lecture, Binmore underscored his reasoning. “It’s impossible to do what they said they did, and the reason is...it’s a lie,” he said.

Binmore said that he had come to believe that behavioural economics had reached its peak. “It was (at one time) the reformation,” he said. “I am the counter reformation. I am trying to beat the drum for orthodoxy.”

Binmore is Emeritus Professor of Economics at University College London and Visiting Professor in the Department of Economics at the University of Warwick. After a career in mathematics, he embarked on economics and has since been at the forefront of game theoretical developments. In 2001, he was awarded the CBE largely for his role as the leading designer of the UK’s third-generation (3G) mobile-phone license auction, one of the prime examples of economic theory in application. At that time, 2000, the telecommunications auction was described as the biggest auction ever. It raised £22.5 million, then equivalent to 2.5 percent of GNP. 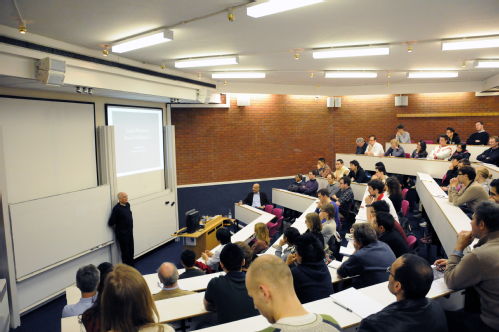