This paper attempts at giving theoretical and empirical answers to the remaining puzzles in the literature on tax competition: the persistently high tax rates on mobile capital and the large variation in domestic tax systems. I argue that governments face a political trilemma, in which they cannot maintain the politically optimal level of public good provision, reduce capital taxes to competitive levels and implement a political support-maximizing mix of tax rates on capital and labour simultaneously. In particular, while legal restriction on capital flows have been eliminated by virtually all OECD countries, de facto capital mobility falls short of being perfect. Limits to full capital mobility result from ownership structures: the higher the concentration of capital, the higher the de facto mobility of capital and the lower the equilibrium tax rate. Second, the demand for the provision of public goods further constraints governments’ choices of the capital tax rate. If revenue from taxation of mobile factors declines, politicians cannot necessarily cut back spending without losing political support. Policy makers, accordingly, do not face a simple optimization problem when deciding on capital taxation. Rather, they have to choose a tax system which allows them to supply an appropriate level of public goods. Policy makers finally face a trade-off resulting from the redistributive conflict between capital-owners and workers. This conflict does not resemble a mere zero-sum game, because lower levels of capital taxation are likely to improve aggregate welfare, but the decision on capital taxation also cannot be analysed in isolation from the distributive effects of reducing taxes on mobile factors. This political logic of tax competition generates important predictions which are tested empirically for 23 OECD countries over 30 years within a spatial econometrics framework. 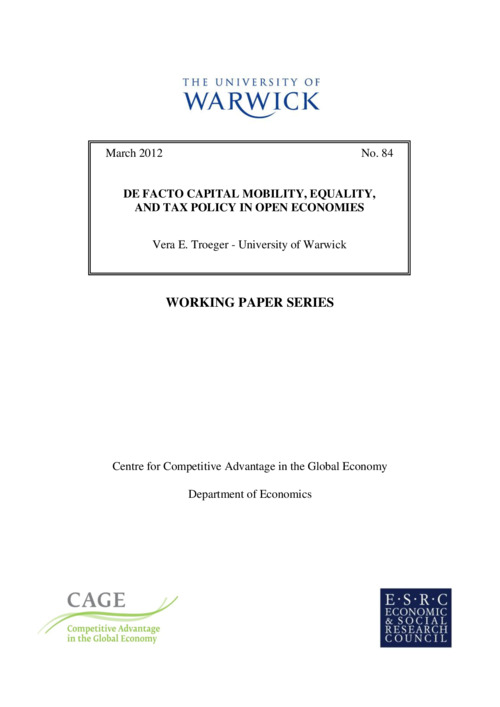