The Spanish Inquisition (1478-1834) lasted for more than three centuries and conducted more than 100,000 trials. Why would the Spanish Crown adopt this type of repressive institution? What were the actual motives of its activity? This paper explores the role of the Spanish Inquisition as a repressive tool of the Spanish Crown. When the Crown had to move military resources abroad to fight a war, the likelihood of an internal revolt against the Crown increased. To minimize the threat of rebellion, the Crown would use the Inquisition to increase repression (trials) in Spain. In a theoretical framework, I show that while the Inquisition would conduct more trials the higher the intensity of the wars fought abroad, it would however decrease its level of repression (trials) if the likelihood of an internal revolt were large enough. This behavior indicates an inverse-U relationship between inquisitorial and war intensity. To test this prediction, I assemble time series data for seven Spanish inquisitorial districts on annual trials of the Inquisition and wars conducted by the Spanish Crown between 1478 and 1808. I show that there is an inverse-U relationship between wars and inquisitorial activity. My results are robust to the inclusion of data on the severity of the weather (droughts) and to adjustments for spillover e.ects from districts other than the main district under analysis. Moreover, using a new database of 35,000 trials of the Inquisition, I show that religious persecution was especially significant during early stages of the Inquisition, while repressive motives better explain its behavior in later periods. 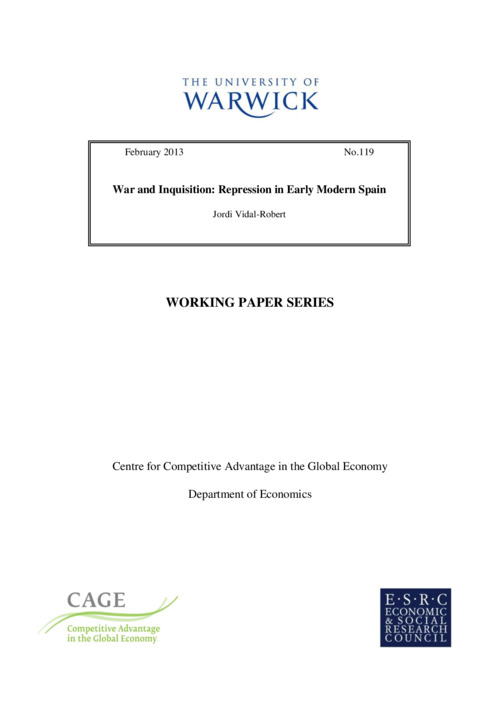