Individual and Societal Wisdom: Explaining the Paradox of Human Aging and High Well-Being

Objective: Although human aging is characterized by loss of fertility and progressive decline in physical abilities, later life is associated with better psychological health and well-being. Furthermore, there has been an unprecedented increase in average lifespan over the past century without corresponding extensions of fertile and healthy age spans. We propose a possible explanation for these paradoxical phenomena. Method: We reviewed the relevant literature on aging, well-being, and wisdom. Results: An increase in specific components of individual wisdom in later life may make up for the loss of fertility as well as declining physical health. However, current data on the relationship between aging and individual wisdom are not consistent, and do not explain increased longevity in the general population during the past century. We propose that greater societal wisdom (including compassion) may account for the notable increase in average lifespan over the last century. Data in older adults with serious mental illnesses are limited, but suggest that many of them too experience improved psychosocial functioning, although their longevity has not yet increased, suggesting persistent stigma against mental illness and inadequate societal compassion. Conclusions: Research should focus on the reasons for discrepant findings related to age-associated changes in different components of individual wisdom; also, more work is needed on the construct of societal wisdom. Studies of wisdom and well-being are warranted in older people with serious mental illnesses, along with campaigns to enhance societal compassion for these disenfranchised individuals. Finally, effective interventions to enhance wisdom need to be developed and tested. 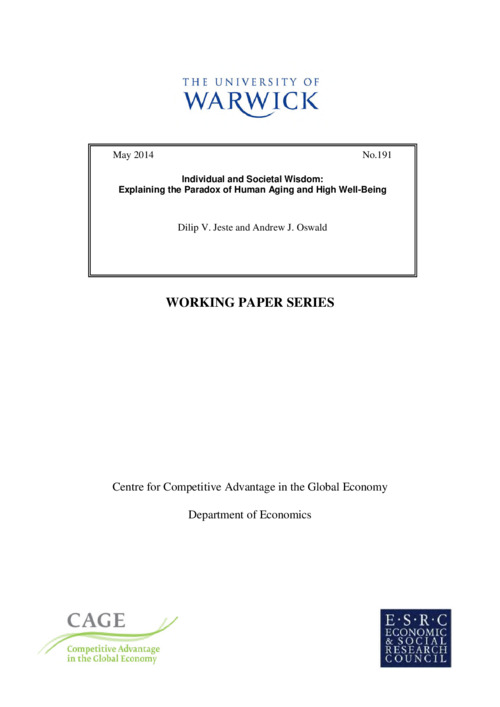