In developing countries with weak institutions, there is implicitly a large reliance on elections to instil norms of accountability and reduce corruption. In this paper we show that electoral discipline may be ineffective in reducing corruption when political competition is too high or too low. We first build a simple game theoretic model to capture the effect of electoral competition on corruption. We show that in equilibrium, corruption has a U-shaped relationship with electoral competition. If the election is safe for the incumbent (low competition) or if it is extremely fragile (high competition) then corruption is higher, and for intermediate levels of competition, corruption is lower. We also predict that when there are different types of corruption, then incumbents increase corruption in the components that voters care less about regardless of competition. We test the model's predictions using data gathered on audit findings of leakages from a large public program in Indian villages belonging to the state of Andhra Pradesh during 2006-10 and on elections to the village council headship in 2006. Our results largely confirm the theoretical results that competition has a non-linear effect on corruption, and that the impact of electoral competition varies by whether theft is from the public or private component of the service delivery. Overall, our results suggest that over-reliance on elections to discipline politicians is misplaced. 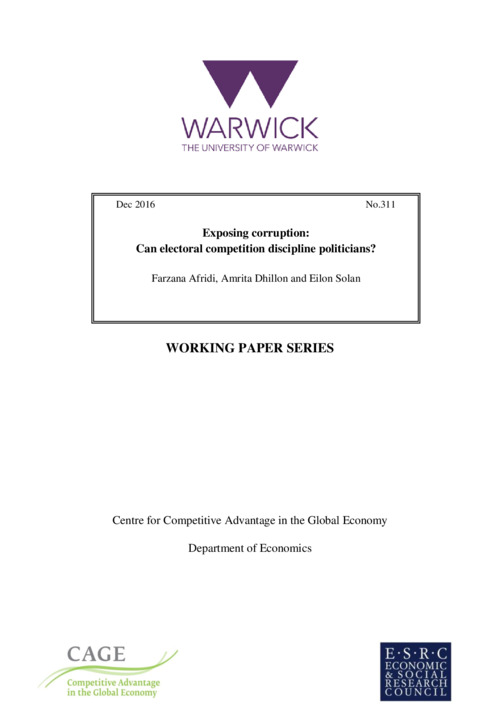