How Successful Was the New Deal? The Microeconomic Impact of New Deal Spending and Lending Policies in the 1930s

The New Deal during the 1930s was arguably the largest peace-time expansion in federal government activity in American history. Until recently there had been very little quantitative testing of the microeconomic impact of the wide variety of New Deal programs. Over the past decade scholars have developed new panel databases for counties, cities, and states and then used panel data methods on them to examine the examine the impact of New Deal spending and lending policies for the major New Deal programs. In most cases the identification of the effect comes from changes across time within the same geographic location after controlling for national shocks to the economy. Many of the studies also use instrumental variable methods to control for endogeneity. The studies find that public works and relief spending had state income multipliers of around one, increased consumption activity, attracted internal migration, reduced crime rates, and lowered several types of mortality. The farm programs typically aided large farm owners but eliminated opportunities for share croppers, tenants, and farm workers. The Home Owners’ Loan Corporation’s purchases and refinancing of troubled mortgages staved off drops in housing prices and home ownership rates at relatively low ex post cost to taxpayers. The Reconstruction Finance Corporation’s loans to banks and railroads appear to have had little positive impact, although the banks were aided when the RFC took ownership stakes. 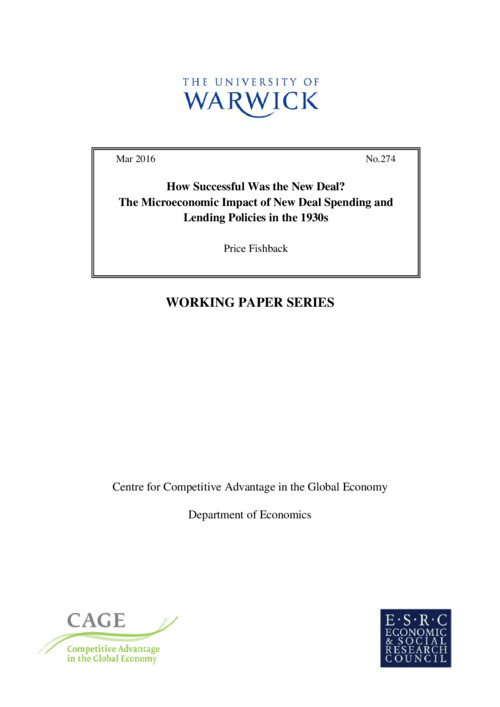