Religion, Division of Labor and Conflict: Anti-Semitism in German Regions over 600 Years

Anti-Semitism continues to be a widespread societal problem rooted deeply in history. Using novel city-level data from Germany for more than 2,000 cities and county-level data, we study the role of economic incentives in shaping the co-existence of Jews, Catholics and Protestants. The Catholic ban on usury gave Jews living in Catholic regions a specific advantage in the moneylending sector. Following the Protestant Reformation (1517), the Jews lost this advantage in regions that became Protestant but not in those regions that remained Catholic. We show that 1) the Protestant Reformation induced a change in the geography of anti-Semitism with persecutions of Jews and anti-Jewish publications becoming more common in Protestant areas relative to Catholic areas; 2) this change was more pronounced in cities where Jews had already established themselves as moneylenders; 3) the Reformation reduced the specialization of Jews in the financial sector in Protestant regions but not in Catholic regions. We interpret these findings as evidence that, following the Protestant Reformation, the Jews living in Protestant regions lost their comparative advantage in lending. This change exposed them to competition with the Christian majority leading, eventually, to an increase in anti-Semitism. 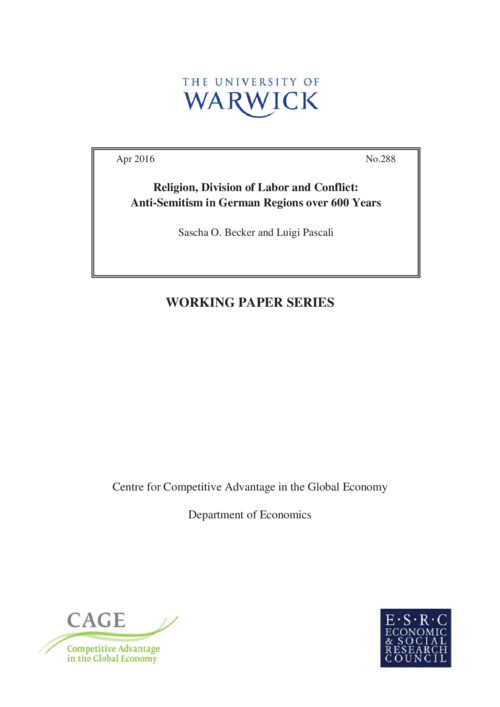