Is Envy Harmful to a Society’s Psychological Health and Wellbeing? A Longitudinal Study of 18,000 Adults

Nearly 100 years ago, the philosopher and mathematician Bertrand Russell warned of the social dangers of widespread envy. One view of modern society is that it is systematically developing a set of institutions -- such as social media and new forms of advertising -- that make people feel inadequate and envious of others. If so, how might that be influencing the psychological health of our citizens? This paper reports the first large-scale longitudinal research into envy and its possible repercussions. The paper studies 18,000 randomly selected individuals over the years 2005, 2009, and 2013. Using measures of SF-36 mental health and psychological well-being, four main conclusions emerge. First, the young are especially susceptible. Levels of envy fall as people grow older. This longitudinal finding is consistent with a cross-sectional pattern noted recently by Nicole E. Henniger and Christine R. Harris, and with the theory of socioemotional regulation suggested by scholars such as Laura L. Carstensen. Second, using fixed-effects equations and prospective analysis, the analysis reveals that envy today is a powerful predictor of worse SF-36 mental health and well-being in the future. A change from the lowest to the highest level of envy, for example, is associated with a worsening of SF-36 mental health by approximately half a standard deviation (p <0.001). Third, no evidence is found for the idea that envy acts as a useful motivator. Greater envy is associated with slower -- not higher -- growth of psychological well-being in the future. Nor is envy a predictor of later economic success. Fourth, the longitudinal decline of envy leaves unaltered a U-shaped age pattern of well-being from age 20 to age 70. These results are consistent with the idea that society should be concerned about institutions that stimulate large-scale envy. 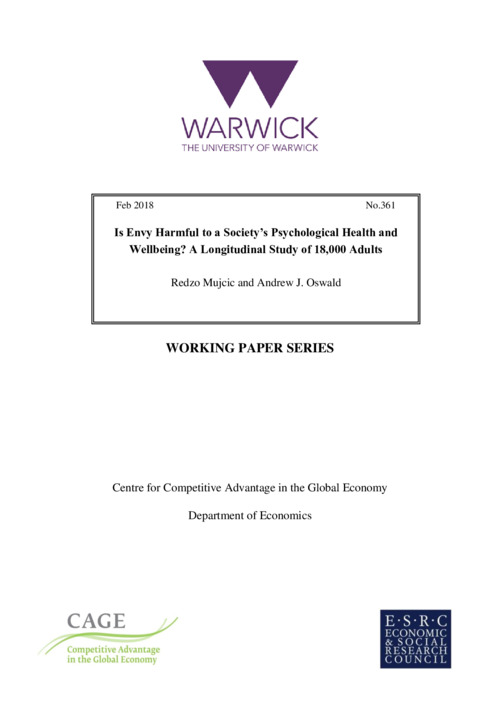