Ramsey famously condemned discounting "future enjoyments" as "ethically indefensible". Suppes enunciated an equity criterion which, when social choice is utilitarian, implies giving equal weight to all individuals' utilities. By contrast, Arrow (1999a,b) accepted, perhaps reluctantly, what he called Koopmans' (1960) "strong argument" implying that no equitable preference ordering exists for a sufficiently unrestricted domain of infinite utility streams. Here we derive an equitable utilitarian objective for a finite population based on a version of the Vickrey-Harsanyi original position, where there is an equal probability of becoming each person. Fora potentially infinite population facing an exogenous stochastic process of extinction, an equitable extinction biased original position requires equal conditional probabilities, given that the individual's generation survives the extinction process. Such a position is well-defined if and only if survival probabilities decline fast enough for the expected total number of individuals who can ever live to be finite. Then, provided that each individual's utility is bounded both above and below, maximizing expected "extinction discounted" total utility | as advocated, inter alia, by the Stern Review on climate change - provides a coherent and dynamically consistent equitable objective, even when the population size of each generation can be chosen. 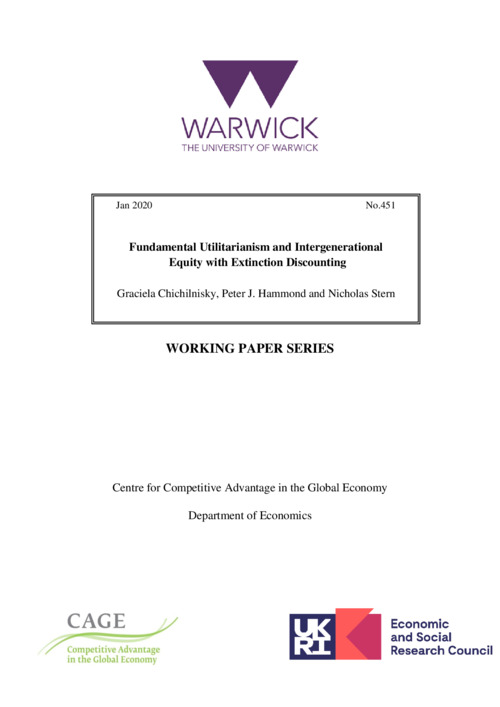