Ali Struthers organised a successful event on campus on the 11th of November with primary and secondary school pupils as part of the ESRC Festival of Social Science. The event saw 60 primary pupils from Widening Participation schools attend campus in the morning and 60 secondary pupils from WP schools in the afternoon. The pupils took part in workshops that addressed challenging issues in the social sciences through literature appropriate to young people. The workshops were run by Ali (human rights), Phil Gaydon (war), James Harrison (labour rights) and Lucy Hatton (immigration), and the event was well-received by all who took part.

Read about James' experience of his morning workshop here.

On Friday 4th November at Conway Hall in London Alice Panepinto hosted a public event on 'Can Law Stop the Demolition of a Bedouin School in the West Bank? Spotlight on al-Khan al-Ahmar' based on her socio-legal research on the significnce of the al-Khan al-Ahmar school demolition case. The event is part of a series of impact activities, funded by the ESRC-IAA Global Challenges Research Fund, which included a briefing with the Middle East Minister at the FCO.

Alice has been awarded £10,900 for the project "Al-Khan-al-Ahmar. Saving a Bedouin School in the West Bank through International Law" through the ESRC Global Challenges Research Fund: Impact Acceleration Account additional funding. This project seeks to bring some of the findings of an article in Social & Legal Studies to a wider non-academic audience in the UK. An event is provisionally scheduled for the second half of November, which will involve participants from the field as well as academics.

Lacuna publishes a thought-provoking selection of migrant experiences across Europe, with exclusive features from Greece, Germany and the UK.

Lacuna magazine: What has the EU ever done for us? – Peace

With 'Super Thursday' behind us, the countdown to the referendum of 23rd June is gaining pace.

In the first of a series of short articles on Europe, Lacuna considers some of the history and record of peace in the EU in What has the EU ever done for us? – Peace. Supporters of the ‘remain’ campaign point to the attainment of peace in Europe as one if its highest ranking achievements. Indeed, war between member states seems unthinkable today. [republished in New Statesman http://www.newstatesman.com/world/2016/05/how-valid-claim-eu-has-delivered-peace-europe]

Turning away from Europe, in Inequality is skin-deep: The Buruli ulcer in Benin photojournalist Ana Palacios gives us a glimpse of the human cost of neglecting this tropical skin disease.

" 'The death of one man is a tragedy,' Josef Stalin is said to have mused. 'The deaths of a million is a statistic.' A.T. Williams's prize winning debut, A Very British Killing, was a passionately written investigation into the death of a single man – Baha Mousa, an innocent Iraqi hotel receptionist killed by British soldiers in Basra in 2003. This, his second book, is a study in myriad deaths – the Nazi perpetration of genocide – and a prolonged meditation on Stalin's idea that the human mind cannot comprehend mass murder... His theme is the imperfect efforts made by the Allied military authorities... to bring the criminals responsible for these horrors to justice." (Daily Telegraph)

"This is a fine book that does a great job of debunking one of the most enduring myths in history." (History of War)

"Splendid book... Much more than a historical narrative and assessment… This is a superb book which offers no easy answers but invites the reader to join its author on a grim odyssey." (History Today)

"Williams has put together an original polemic against our assumptions about these trials, including those at Nuremberg. (David Herman, New Statesman)

"... skilfully reveals a chaotic world in which war crimes investigation teams... were left to do their best in extremely trying circumstances." (Scotland on Sunday)

"Professor Shaheen Ali was invited to the Soroptomists at Kenilworth on the 28th of April where she spoke on the subject of 'Women's Human Rights and Global Justice.'

At the April Soroptomists dinner meeting, SI Kenilworth welcomed several guests who joined them for a membership event. The highlight of the evening was a talk by Professor Shaheen Ali, from the Law department of Warwick University, who gave us a fascinating talk on Women’s Rights. To find out more click here 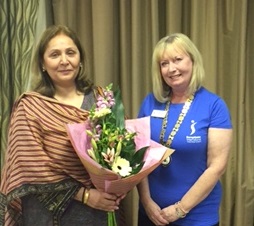 Thu 19 May 2016, 16:21 | Tags: Presentation at an external location, Gender and the Law Cluster, Centre for Human Rights in Practice, Seminar

work and her profound humanity."

Sharif Sekalala is presenting a paper at a workshop on 'The emerging norm of global representation in global health' as part of 'Brown University's international Advanced Research Institute' which is focusing on global health in Madrid from the 10th - 16th of January 2016. Click here to read on.

What is the measure of ‘universality’? Critical reflections on International criminal justice, the Nuremberg principles, ICC and pluralist Islamic legal traditions

Shaheen Sardar Ali was an invited panelist at an international conference organised by the Nuremberg Academy, Germany to commemorate the 70th anniversary of the start of the Nuremberg Trials (19 to 21 November 2015). She presented a paper entitled: 'What is the measure of ‘universality’? Critical reflections on International criminal justice, the Nuremberg principles, ICC and pluralist Islamic legal traditions.' To find out more click here.

In Search of Authority and Authenticity? UK Shari'a Councils and Muslim Women's Rights

Shaheen Sardar Ali was invited to present a paper entitled: 'In Search of Authority and Authenticity? UK Shari'a Councils and Muslim Women's Rights' at an international conference: Legal Pluralism and human rights within family disputes in Europe organised by the Ghent University Human Rights centre 26-27 October 2015 to find out more click here.

Warwick Law school students have recently been interviewed for the Boar, to discuss the legal representation they're providing to death row inmates in the USA as part of a summer internship.

Please see below for the article: