The Queen’s Young Leaders Programme began in 2014 hoping to discover, celebrate and support exceptional young people from across the Commonwealth who are taking the lead in their communities and using their skills to transform lives. In only 3 years, there have already been two winners from Warwick Law School.

Former LLM student Bukola Bolarinwa was presented with the award as recognition of her amazing work with blood donors, to help those living with 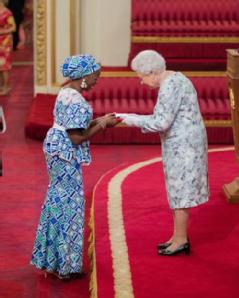 Sickle Cell in Nigeria. She set up Haima Health Initiative in 2015 to address the blood shortage in Nigeria and lack of regular donors. The organisation encourages people to get tested to know their haemoglobin genotype, carries out free genotype tests and has set up Sickle Cell clubs in schools to inform and educate young people about the condition. So far they have reached over 17, 000 people across the six area councils in Abuja.

When asked about the work of the initiative, Bukola told us, “We work with a team of volunteers to organise monthly blood drives across 5 states to ensure hospitals have enough blood for patients to be given out for free. We have built an online blood register which aims to be the largest in Nigeria for young voluntary donors to be linked to patients in need of blood.”

Bukola is also President of the Sickle Cell Aid Foundation (SCAF) which she joined back in 2011. She was inspired to join SCAF as she suffers from the Sickle Cell disease and wanted to do more to raise awareness about it. “Nigeria has the highest rate of SCD in the world as well as one of the highest rates of mortality from the disease and unfortunately awareness is incredibly low and the levels of care are sub-par.”

Upon joining SCAF, Bukola began a monthly campaign drive in partnership with the National Blood Transfusion Service to try to ensure a regular supply of donated blood, and to help combat cultural fears about giving blood. In 2015, she set up an online blood donation register which asks young people to register to donate in emergency situations. During its first year, the register has gained more than 1,000 prospective donors and, through the use of social media and text messaging, linked over 500 donors with patients in urgent need. Bukola is currently working to recruit 5,000 people as registered blood donors by December 2017.

On finding out she had won the award, Bukola remembers “it was an exciting feeling because as much as I wanted it, I genuinely did not expect to win. It felt amazing for our work in our little corner of the world to be recognised at such a large platform.”

The ceremony took place at Buckingham Palace where she got to meet the Queen and attend a reception dinner hosted by Sir John Major (Chairman of the Diamond Jubilee Trust). She also got to meet Price Harry… “He was actually sat on the table next to me at dinner which was very exciting. The whole day was magical and one that I will never forget.” 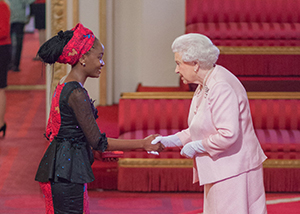 Back in 2015, another LLM alumna, Nkechi Azinge received the same award as a result of her work with SCAF. Set up in 2010, SCAF aims to raise awareness of the Sickle Cell condition and ensure the less privileged receive access to quality healthcare, thereby reducing the appalling mortality rate in babies born with the disease in Nigeria. 150,000 babies are born each day with this disorder and 100, 000 of them die before they are five.

She remembers the awards ceremony as being everything she imagined and more… “Meeting the Queen was an overwhelming experience, it was so surreal that I missed my steps whilst curtseying.”

It turns out that Bukola and Nkechi are good friends. Their lives have been intertwined for a long time, having studied together for their undergraduate degrees at the University of Leicester and their LLMs here at Warwick, albeit in different years; but they finally became friends at the Nigerian Law School in Bwari in 2012, when they were both involved with SCAF. Nkechi recalls that she had just been offered a place on the Warwick LLM when they met, and Bukola had previously done her Master’s there… “It was great to have someone to guide me so I always bugged her with questions during my stay at Warwick.” 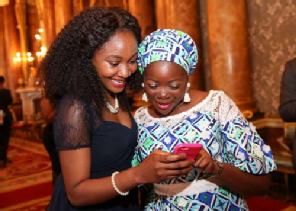 When asked about each other it is clear they have a special bond and work well together as a team. Bukola says “Nkechi and I are a little like Tom and Jerry because we disagree all the time and have very different personalities. I am a pessimist and often plan for the worst but Nkechi is an optimist and believes in trying over and over […but] these differences are why we work so well together and have managed to remain friends. We share the same overall goal of improving the healthcare provision for people in Nigeria and across Africa. We always support, encourage and learn from each other.”

Nkechi adds “Bukky is the calm to my storm, she balances me out perfectly; constantly reassuring me that our projects are working effectively, and that we are reaching the right people and making a difference.”

The Foundation has embarked on a number of projects since its formation including: The Sickle Cell Club Scheme; the Know Your Genotype Campaign; A Warm Clothes Drive and Blood Drive; and My Sickle Cell Story - which have increased awareness and resulted in a 5% rise in people getting tested to find out their genotype. Nkechi maintains however, that “it’s more than just statistics, because every life matters.”

More importantly then, SCAF has established sickle cell clubs in over 30 schools across the various area councils in Abuja, reaching over 5000 children. These clubs empower students to impact on their immediate community, and as a result of these projects, more people now have access to free drugs, free medical care and warm clothes; students with SCD from indigent homes are also placed on a scholarship. 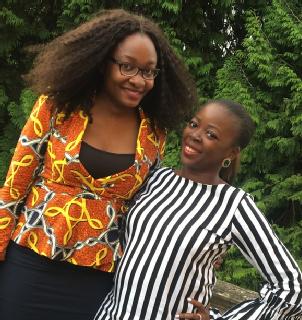 Nkechi was inspired to set up SCAF after watching her twin sister undergo a series of health crises in Nigeria. Her health however, dramatically improved when she moved to England. Nkechi says “I became curious as to how the less privileged with sickle cell disorder could get access to quality healthcare like my sister did. I was further perplexed by the lack of awareness and stigma attached to sickle cell disorder.”

Bukola and Nkechi both studied our LLM in International Economic Law. When asked about their time at Warwick, both remember it fondly; Nkechi is currently studying her PhD with us and Bukola hopes to come back some time in the future. They each claimed it gave them the opportunity to meet great friends and offered up some world class opportunities. Bukola said “Warwick opened me up to a world of volunteering for social change which formed the basis of my work today.” Nkechi added “Warwick exposed my mind to varying aspects of Law, which I am very passionate about.” Simply put she says, “Warwick was and is still awesome! I absolutely love it here.”