Valérie Hayaert is a classicist, historian and humanist researcher of the early modern European tradition. Her particular interest lies in the mens emblematica, the humanist lawyers’ invention of woodcut depictions of legal and theological themes, in the tradition of playful seriousness or serio ludere. She received the EUI Alumni Prize for the best interdisciplinary thesis in 2006. Her book ‘Mens emblematica’ et humanisme juridique was published in 2008. Her subsequent work looked at the aesthetics of justice in courthouses of the early modern period until today. Valérie has taught in Cyprus, Tunisia, England and France and held various positions and fellowships. From 2014 to 2018, she served as co-editor for the Journal Emblematica. An interdisciplinary Journal for Emblem Studies (AMS Press, New York then, Droz Geneva). She co-authored with the French judge Antoine Garapon Allégories de Justice : la grand’chambre du Parlement Flandre à Douai, and recently contributed to two exhibitions in Belgium on images of Justice : The Art of Law, Groeningen Museum, Bruges (2017) and Call for Justice, Hof Busleyden Museum, Mechelen (2018). Her forthcoming new book is entitled Lady Justice : the Anatomy of an Allegory (Edinburgh University Press).
Valérie has recently been awarded the prestigeous Eutopia Science and Innovation Fellowship and she will pursue her research at the Criminal Justice Centre, University of Warwick. This research is entitled a European Survey of Legal Symbolism.
Wed 03 Nov 2021, 16:55 | Tags: courts, Criminal Justice, Criminal Justice Centre, Fellowship, criminal law, imagery

The tension between formality and informality is intrinsic to the implementation of criminal law. Criminal procedures in fact always happen on a continuum between formality and informality, where the different actors involved (police officers and other street-level bureaucrats, prosecutors, judges, experts, defense lawyers, etc.) continuously perform and negotiate (in)formality. In this special issue, we aim to explore these “politics of (in)formality” in different criminal law settings and from different disciplinary perspectives.

To see the full Call: https://www.journals.elsevier.com/international-journal-of-law-crime-and-justice/call-for-papers/the-politics-of-in-formality-in-criminal-procedures

A selection will be made soon thereafter. The journal submission deadline is 31 March 2021.

CJC Member Dr. Laura Lammasniemi was recently announced as a winner of the prestigious British Science Association (BSA) Lecture Award Series for 2021. Laura was recognised as the winner for social sciences based on her work 'Sexual Consent -Looking back at the law'. There were seven awardees across a number of disciplines who represent Early Career Researchers based in the UK who have displayed cutting edge work and committed public engagement.

The seven awardees will be present at a special Q + A event during the British Science Festival at the Chelmsford campus of Anglia Ruskin University in September where they will delve into their research and its real-world implications.

A short clip of Laura talking about her work can be found here on the BSA's Youtube channel. 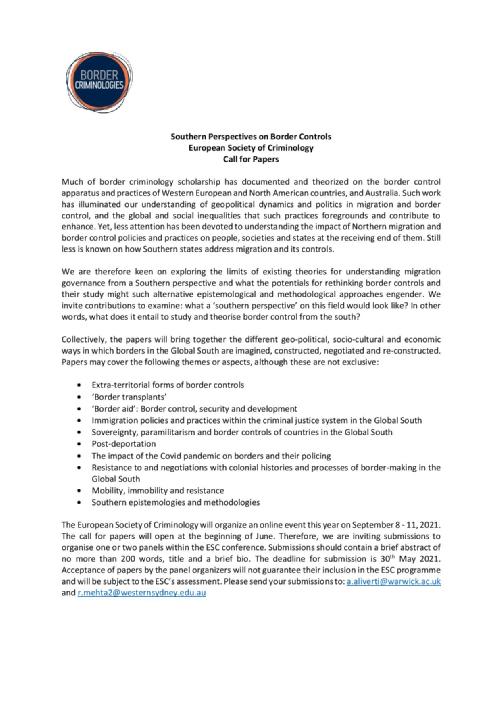