We are delighted to announce that the Department of Politics and International Studies (PAIS) at the University of Warwick has moved up to joint 2nd place out of 79 UK Politics Departments in The Times/The Sunday Times Good University Guide 2023. This prestigious league table continues to place us 1st in the Russell Group for both ‘teaching quality’ and ‘student experience’.

Professor Matthew Clayton, Head of PAIS, commented: “It is always really pleasing when the collaborative efforts of staff and students to sustain an inclusive and productive learning environment are recognised in national league tables. PAIS is a special department in which every member of the community is supported to find their own voice by engaging with the best scholarship in our discipline. I congratulate colleagues and students alike for their work and look forward to our building on this consistent success in the future.”

Dr Justin Greaves, Director of Student Experience and Progression, commented: “This is brilliant news for the PAIS Department and all our students, alumni, and staff. It follows our great success in the 2022 National Student Survey (NSS) where we were once again 1st out of all Politics departments in the Russell Group in all categories, including 1st for overall student satisfaction. These consistent results are a testament to the hard work and brilliance of everyone who works and studies in PAIS, along with our ethos as viewing students as partners, producers, and collaborators, and valuing and acting on student feedback. We will continue to place a strong emphasis on academic support, including on study choices, and employability and skills. I look forward to working with our incoming and returning students to ensure that the PAIS Department continues to go from strength to strength. Congratulations everyone!”

Thank you to all our students and staff for PAIS' continued success.

Although the constitutional status of its Self-Defence Forces (SDF) remains a subject of intense political debate, Japan’s participation in military exercises has in fact grown quite rapidly over the years. Drawing from interviews with SDF officers and civilian policymakers, his paper explores what strategic cost-benefit calculations help explain Japan’s choice of specific partners or exercise formats (bilateral/multilateral) in the region. Were exercises valued or developed according to some political, strategic, capacity-building, military/operational, or other benchmark? To what extent do those exercises help Japan maintain or achieve its desired vision of regional order?

Geoeconomics of Infrastructure Financing in the Indo-Pacific

Saori N. Katada is Professor of International Relations at University of Southern California, and she is currently a Banque de France/Fondation France-Japon Fellow at L’École de Haute Etudes en Sciences Sociales (FFJ/EHESS) in Paris France. Her book Japan’s New Regional Reality: Geoeconomic Strategy in the Asia-Pacific was published from Columbia University Press in 2020, and its Japanese version in 2022. She has co-authored two recent books: The BRICS and Collective Financial Statecraft (Oxford University Press, 2017), and Taming Japan’s Deflation: The Debate over Unconventional Monetary Policy (Cornell University Press, 2018). She was the vice president of International Studies Association (ISA) from 2021 to 2022. She has her Ph.D. is from the University of North Carolina at Chapel Hill (Political Science), and her B.A. from Hitotsubashi University (Tokyo). Before joining USC, she served as a researcher at the World Bank in Washington D.C., and as International Program officer at the UNDP in Mexico City.

The Data and Displacement project (PI: Vicki Squire) launched its final project report at the Palais des Nations in Geneva on 12 September. The findings reveal that, as new ways to collect data continue to grow, humanitarian actors need to improve ethical and operational data practices for internally displaced persons (IDPs).

The AHRC and FCDO-funded team of researchers for the Data and Displacement project come from the Universities of Warwick, Ibadan, Juba and Glasgow, and from the International Organization for Migration (IOM).

Over two years, the team of experts conducted 174 in-depth interviews with a range of stakeholders, including international data experts, donors, and humanitarian practitioners, as well as regional humanitarian actors and IDPs living in camps in north-eastern Nigeria and South Sudan.

You can read the report here. 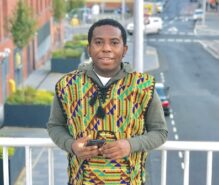 PAIS are delighted to announce that Victor Agboga, has been awarded a prestigious Routledge/Round Table Commonwealth Studentship award for the academic year 2022-23. (The Round Table being the leading Commonwealth journal, founded in 1910, and Routledge being the journal's publishers.) Only two of these awards are made each year.

Victor has worked as a student missionary, a news writer in several media outlets in Nigeria, and a teaching assistant in PAIS. He also owns a YouTube channel with over forty thousand subscribers as of September 2022, where he shares international scholarship tips and opportunities.

Victor’s research revolves around African politics, African political economy, human security, and international development. He has won several international awards including the Standard Bank Africa Chairman Scholarship, the Helmut Schmidt Masters Scholarships for Public Policy and Good Governance, the Mo Ibrahim Governance for Development in Africa Initiative Scholarship, the British Institute in Eastern Africa Grant, and the Working Group in African Political Economy Grant. His research interrogates, both quantitatively and qualitatively, how voters respond when their elected politicians change political parties – whether they punish or reward them, in a non-Western context. He particularly examines this phenomenon in Africa, using Nigeria, the biggest democracy on the continent, as a case study. His research sits against the backdrop of ongoing debates on voters’ agency and party institutionalisation in Africa.

With the Routledge/Round Table Commonwealth Studentship award, he aims to produce an academic paper for the Round Table, plan conference presentations within and outside Africa, film a podcast on his key findings on voters’ response to party switching in Africa, and disseminate them both in academic and policy spaces.

You can find more information on the Routledge/Round Table Commonwealth Studentship Awards on their website.