Researchers from the University of Warwick and University college Dublin (UCD) have teamed up with Coventry based theatre group Talking Birds to explore the devastating effect of solitary confinement in prison in a new play, Disorder Contained: a theatrical examination of madness, prison and solitary confinement.

Disorder Contained has already brought research into the history of mental health to a wider audience through sold out performances in the UK and Ireland before heading to Shoreditch’s Rich Mix on Monday 9 October and Tuesday 10 October.

The production makes academic research accessible to the public and opens up conversations about mental illness and its history.

Set in the mid-19th century, Disorder Contained explores the ‘Separate System’, the spiritually-inspired implementation of solitary confinement introduced into British and Irish prisons and intended to enable prisoners to repent their crimes.

Talking Birds have worked closely with academics to interpret their research, drawing on contemporaneous documents such as prisoners’ memoirs, doctors’ and chaplains’ journals, and the reflections of prison staff. Using music, song, compassion, and humour the show explores the rationale behind solitary confinement and prisoners’ responses to it.

Professor Hilary Marland, Director of the Centre for the History of Medicine at the University of Warwick says,

“The Separate System was originally conceived by prison chaplains, doctors and governors as a way for prisoners to reflect upon their crimes and reform. Prisons were built to totally prohibit contact between prisoners, who wore masks when moved around the prison and were placed in individual stalls, or ‘coffins’, when attending chapel. Prisoners described how the regime put each man in his ‘private hell’.” 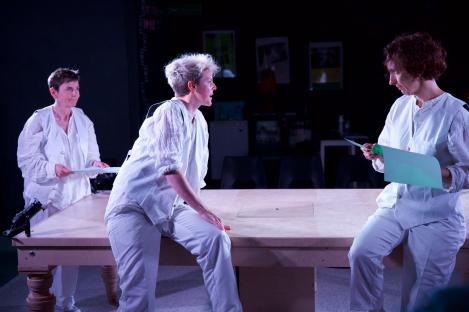 "There will be expert panel discussions after each performance providing opportunities for audience members to discuss the making of the piece with researchers and the theatre company, and to engage in debate on issues raised by the performance."

Associate Professor Catherine Cox, Director of the Centre for the History of Medicine at University College Dublin in Ireland says, “Evidence that the Separate System caused hallucinations, delusions, and insanity quickly became overwhelming. But rather than being abandoned, the elements of penitence and reform were reduced and the system transformed into a regime of harsh and deliberate punishment, one that has endured until the present day.”

Writer and Director Peter Cann explains the challenge of interpreting the research: “This show is the final part in a trilogy of work we’ve made together exploring insanity, its treatment and containment in the 18th and 19th centuries. Over time, we have developed a way of working that takes historical material – which makes for fascinating if rather grim reading – translating it into characters and stories which resonate with today’s issues.”

Tickets to Disorder Contained: a theatrical examination of madness, prison and solitary confinement are available on the Rich Mix website: https://www.richmix.org.uk/events/theatre/disorder-contained

Talking Birds is a Coventry-based theatre company, renowned for its work connecting people and place. In addition to the Asylum Trilogy, previous collaborations with the Centre for the History of Medicine at the University of Warwick include Three Doctors, marking the history of Coventry & Warwickshire Hospital, and The Ballad of Elizabeth Barnwell.

The performance has been created as a part of ‘Prisoners, Medical Care and Entitlement to Health in England and Ireland, 1850-2000’ a five-year project, funded by a Wellcome Trust Senior Investigator Award, and led by Professor Hilary Marland (University of Warwick) and Associate Professor Catherine Cox (University College Dublin) which undertakes research into topics that resonate with current concerns in the prison service, including the very high incidence of mental health problems amongst prisoners, the health of women and maternity services in prison, and responses to addiction and HIV/AIDS.