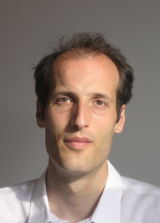 Professor Martin Hairer will be giving the next distinguished lecture entitled 'Taming Infinities'. Martin Hairer is a celebrated mathematician working in the field of stochastic analysis, in particular stochastic partial differential equations.

Some physical and mathematical theories have the unfortunate feature that if one takes them at face value, many quantities of interest appear to be infinite. Various techniques, usually going under the common name of “renormalisation” have been developed over the years to address this, allowing mathematicians and physicists to tame these infinities. In this lecture, we will dip our toes into some of the mathematical aspects of these techniques and we will see how they have recently been used to make precise analytical statements about the solutions of some equations whose meaning was not even clear until now.

During his career Martin Hairer has won the Junior Whitehead Prize, London Mathematical Society (2008); the Philip Leverhulme Prize (2008); the Wolfson Research Merit Award (2009) and the Leverhulme Research Leadership Award (2012-2017). He was also a Laureate of the 2013 Fermat Prize, Institut de Mathématiques de Toulouse (2013) and holds a five-year Consolidator grant from the European Research Council (2014-2018). He was elected Fellow of the Royal Society in 2014.