The man attributed with the drastic decrease in the size of Thai families from an average of 7 to 1.5 children has been reflecting on how he managed to influence a nation’s contraception habits. 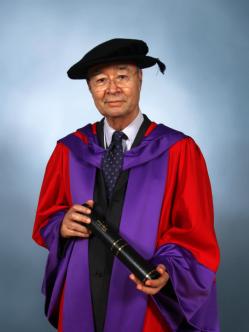 Since 1974, Mechai Viravaidya has been creating and running innovative family planning and poverty reduction programs throughout Thailand. This month (January 2017) he received an Hon LLD (Honorary Doctor of Laws) from the University of Warwick in recognition of his work. Mr Mechai has been campaigning since the early 1970s.

His promotion of condoms was initially adopted to cut the high birth rate in Thailand; later in the 1980s he campaigned for their use to tackle AIDS. His influence at making the condom acceptable was so great the contraceptive became part of Thai popular culture and he is sometimes affectionately known as "Mr. Condom", and condoms are often referred as "mechais". He founded the Population and Community Development Association in 1974 to address the unsustainable population growth rate in Thailand of over 3% annually at the time. A variety of humorous, innovative, and unorthodox methods were utilised in conjunction with mobilising and educating a network of rural school teachers and village community members to make contraceptives available throughout Thailand. This resulted in the more sustainable population growth rate of 0.5% by 2003.

When asked why he thought his campaigns were so successful he attributed it to four points: “Identify the problem and explain to the public what the problems are…explain it in very simple terms and get them to be involved in these changes in attitude and behaviour…don’t give up - we take no as a question not an answer. Where possible we use humour and that’s been a very important element of getting people to accept what we do.”

When HIV/AIDS first appeared in Thailand in the mid-1980s, similar methods were used to launch a major prevention programme, which resulted in a 90% decline in new infections according to UNAIDS and an estimated 7.7 million lives saved according to the World Bank, within 12 years.

Over the course of his career Mr Mechai was appointed to such key positions as Thailand’s Cabinet spokesman, the Minister of the Office of the Prime Minister, and Chairman of several of Thailand’s largest government-owned enterprises. He was also elected to the Senate between 1987-1991, 1996-2000, and 2000-2006. Recognising that civil society organisations cannot survive and expand solely on the generosity of others, he established Thailand’s first social enterprise. Following his success at promoting contraception and HIV prevention, Mr Mechai is now tackling the problem of rural poverty by empowering the poor through the Village Development Partnership, to build sustainable entrepreneurial capacity, community empowerment for health, and income generating activities at the village level in Southeast Asia.

For his efforts in various development and educational endeavours he has been acclaimed with numerous awards and recognition. These include the United Nations Population Award, the Bill and Melinda Gates Award for Global Health, the Prince Mahidol Award for Public Health, the Ramon Magsaysay Award for Public Service, and the Skoll Award for Social Entrepreneurship. He was also named one of Asiaweek’s “20 Great Asians”, and one of TIME Magazine’s “Asian Heroes” to mark the magazine's 60th year of its publication in Asia.

When asked if her was surprise at his success he said: “I’m delighted with the success you could say surprised but I never thought I would fail and took no as a question not an answer – whenever people disagreed with me I ask myself did I explain that poorly or was it they just weren’t interested? And we had to keep going like water on a stone and never fight back, be polite, humble and smile and add some humour where possible.”

He continues to develop his programme of establishing schools to change the face of Thai rural education, schools which serve the whole community not just pupils.