Scientists have shown that orangutan call signals believed to be closest to the precursors to human language, travel through forest over long distances without losing their meaning. This throws into question the accepted mathematical model on the evolution of human speech according to researchers from the University of Warwick. 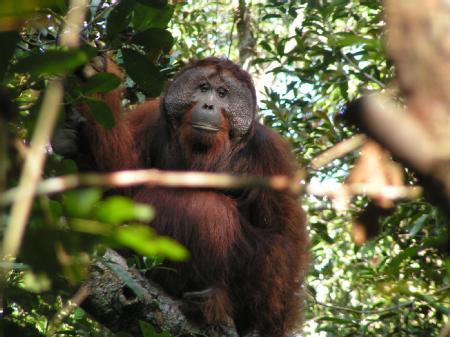 The currently accepted model, developed by mathematicians, predicts that human ancestors strung sounds together in their calls in order to increase their chances of carrying a signal’s content to a recipient over distance. Because signal quality degrades over larger distances, it is proposed that human ancestors started linking sounds together to effectively convey a package of information even if it is distorted.

Researchers from the University of Warwick’s Department of Psychology set out to collect empirical data to investigate the model. They selected a range of sounds from previously collected audio recordings of orangutan communications. Specific consonant-like and vowel-like signals were played out and re-recorded across the rainforest at set distances of 25, 50, 75 and 100 metres. The quality and content of the signals received were analysed. The results are revealed in the study: Orangutan information broadcast via consonant-like and vowel-like calls breaches mathematical models of linguistic evolution published today in Biology Letters.

The team found that although the quality of the signal may have degraded, the content of the signal was still intact – even at long distance. In fact the informational characteristics of calls remained uncompromised until the signal became inaudible. This calls into question the existing and accepted theory of language development.

Dr Adriano Lameira, an evolutionary psychologist from the University of Warwick, led the study. He said:

“We used our bank of audio data recordings from our studies of orangutan in Indonesia. We selected the clear vowel-like and consonant-like signals and played them out and re-recorded them over measured distances in a rainforest setting. The purpose of this study was to look at the signals themselves and understand how they behaved as a package of information. This study is neat because it is only across distance that you can hope to assess this error limit theory – it disregards other aspects of communication like gestures, postures, mannerisms and facial expressions.

“The results show that these signals seem to be impervious to distance when it comes to encoding information. 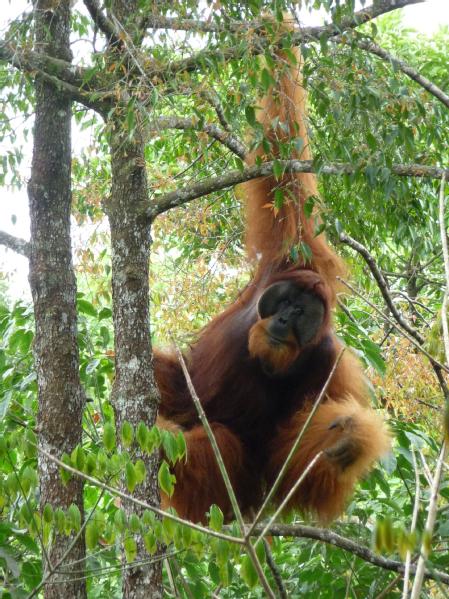 “It calls into question the existing thinking based on the model set out 20 years ago by Harvard scientists. Their work assumes that the signals that our ancestors were using were reaching an error limit – a moment when a signal is received but stops being meaningful. They concluded that our ancestors linked sounds together to increase the chance of content travelling over distance.

“We know sound degrades the further away from the source you are. We have all experienced this effect when shouting for your relative or your friend. They don’t hear all the words you say – but they recognise you are talking to them and that it is your voice. By using actual great ape communication sounds, which are the closest to those used by our hominid ancestors, we have shown that although the sound package is being distorted and pushed apart, the content remains unaltered. It’s a call to the scientific community to start thinking again about how language evolved.”

Dr Adriano Lameira and his team used orangutan calls because they were the first species to diverge from the great ape lineage but are the only great ape which uses the vowel and consonant like sounds in a complex way – giving a parallel with human speech.

His research team is now moving on to deciphering the meaning of their calls. The research involves pulling together all the ways orangutan combine calls, putting the consonant and vowel sounds together to get meaning.

He said: “We still don’t know what they are referring to, but right now what is completely clear is that the building blocks of language are present. Although other animal sounds and signals are complex, they are not using the same building blocks. We are focussed here on the building of language – exactly the component the great apes use. It gives us the parallel to human language.

“The Harvard model has been the accepted theory for years and if you ask a mathematician if language origins were still a puzzle they’d say no – but evolutionary psychologists are still working on it. But we haven’t solved the puzzle either – if anything we have just gone deeper down the rabbit hole.

“We are proposing that mathematical models be applied to the real life data to see what we can come up with together.”