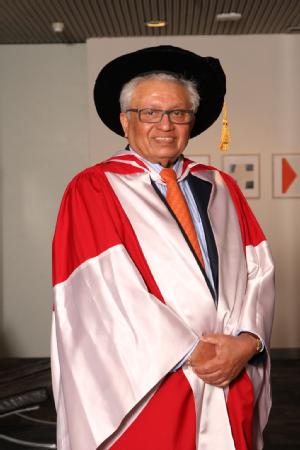 Professor Lord Kumar Bhattacharyya, Chairman of WMG at the University of Warwick, was awarded an Honorary Doctorate by Monash University in a ceremony held on Wednesday 20th May in Melbourne, Australia.

Professor Lord Bhattacharyya founded WMG in 1980 to help reinvigorate UK manufacturing. From its inception WMG’s mission has been to improve the competitiveness of organisations through the application of value adding innovation, new technologies and skills deployment, bringing academic rigour to industrial and organisational practice. Today it is a world-leading research and education group and the largest single organisation dealing in the multi-disciplinary facets of manufacturing developments.

In 2012 Monash University and the University of Warwick launched the Monash-Warwick Alliance; a new model for higher education to meet the needs of industry, government and globally mobile students.

Since the Monash-Warwick Alliance’s inception, WMG has been involved in opportunities including manufacturing, nanomaterials, smart vehicles and linkages between the WMG Academy for Young Engineers and the John Monash Science School.

Professor Lord Bhattacharyya was previously appointed a CBE in 1997 and knighted in 2003. In 2004, he was made a life peer as Baron Bhattacharyya of Moseley in the County of the West Midlands. In 2014 he was elected to the Fellowship of The Royal Society for his contribution to engineering research and education and he has been awarded honorary doctorates by many universities worldwide. Professor Lord Bhattacharyya has published extensively in the field of manufacturing and he is an advisor to many companies and organisations around the world. He has advised past and present UK government on manufacturing, innovation and technology and has been instrumental in many large scale inward investments in the United Kingdom, most recently the Tata acquisition of Corus and Jaguar Land Rover.

Commenting on the awarding of the Honorary Doctorate, Professor Lord Bhattacharyya said:

“It is an honour to be awarded this Honorary Doctorate by Monash University, an internationally recognised home to innovative engineering research solutions and exceptional teaching.

“As Chairman of WMG, I am pleased to see the Monash-Warwick Alliance bringing academics, manufacturers and students together to enable world-leading collaborations with businesses and exciting opportunities for next generation of engineers.

“This is the same ethos in which I created WMG, over 34 years ago, to bridge the gap between academia and industry, and to provide education programmes which enabled people to learn new skills and explore research to help their business grow. Since then we have seen many successful products developed and people succeed in business, which shows this is a winning formula.”