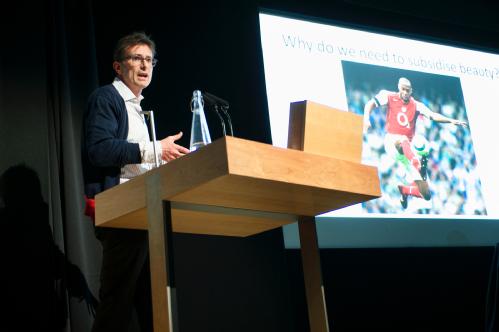 On 4th February, BBC Business Editor Robert Peston kick-started the Warwick Commission’s public debate on the future of cultural value with a truly provocative keynote. Addressing the question ‘Are cuts to funding the greatest threat to the arts?’, Peston identified a fundamental category error in many of the arguments currently used to justify spending on culture and suggested that present funding models are ‘broken’.

Beginning with a rather bleak summary of the UK’s current economic situation, Peston provided a brief moment of cheer with a graph showing that more people are engaging and participating in arts and culture than before the crash in 2008. But he quickly went on to say that this engagement is ‘shallow’ and pointed out that the average British household spends less per week on live entertainment than a packet of crisps!

Arguments based purely on the positive economic impact or the social benefits of the arts, valid and convincing as they may be, overlook the vast spectrum of value attached to creativity and culture. Instead, he suggested, supporters and producers of culture must take a more holistic approach, one that also recognises the reality that funding is unlikely to increase in the coming years.

“The argument is how we distribute funding, not how do we get more - that isn’t going to happen,” said Peston. “Hospitals will always win the public vote so perhaps we should just have a set amount and work out how to distribute that better.”

Peston concluded on a challenging note with the following suggestions:
• That subsidies for cultural events frequented by primarily white, middle-class audiences is “regressive”;
• That the big, national, subsidised organisations need to make their work available for free online once its commercial value has been exhausted;
• That the arts need to work on articulating their “spin-off value” that goes beyond their commercial and economic impact. 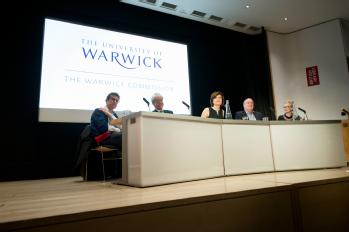 The panel’s responses were no less provocative. Sir Richard Lambert, University of Warwick Chancellor and former Director of the CBI, suggested that the Department of Culture, Media and Sport was superfluous and ineffective, adding that “such a small department will always get rolled over by the Treasury”.

Bev Skeggs, Professor of Sociology at Goldsmiths, approached the issue of class and diversity head-on, asking “What has happened to working class art?”. The rise in tuition fees, coupled with cuts to benefits, she feared, is resulting in the marginalisation of those from less privileged backgrounds, whilst at the same time promoting the “Etonisation” of the music and film industries.

The national distribution of funding also came under fire with many complaining of a London-bias in funding structures that sees the regions neglected in favour of the capital. In response, Chief Executive of the Arts Council England, Alan Davey, called upon Britain’s national institutions to do more to earn their keep by looking beyond their London bases and engaging with the regions.

But it was not just the panellists who participated in the debate. When Jane Hill opened the floor to questions, a sea of hands shot up. Contributions ranged from suggestions to impose a levy on commercial cultural transactions to questions about the relationship between culture and business and how an investment and return model might aid the arts. And there were also direct challenges to the panel and the Commission, with one audience member inquiring “where’s the artist’s voice in this debate?” to a round of applause. [Full coverage of the audience’s questions and the panel’s answers can be viewed here.]

And the debate continued outside the packed auditorium with the event’s hashtag #futureofculture becoming the UK’s number one trending topic on Twitter.

Reflecting on the evening, the Commission’s co-Director of Study, Jonothan Neelands said: “The first provocation was a great success and a great way to start our research into the future of cultural value in this country. We had a full auditorium at the wonderful British Library and the discussion was full of lively, passionate debate that raised important issues for the commissioners to sift through.

“The interest it stirred on Twitter shows how important this subject is not only to those involved in arts and culture but our society as a whole. It has certainly whetted the appetite for more debate and research into what our culture and arts means to us and how we should nurture it – if we should at all.”

The Commission is committed to promoting and supporting an open debate on the future of cultural value. As part of this discussion, it would like to respond to some of your questions, posted during and after the debate. Click here

to read our thoughts on your questions.