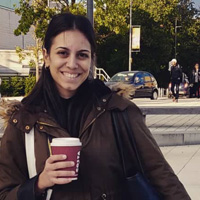 How did you find out about Warwick?

I first heard about Warwick from my father, who was searching for universities that I could apply to, and also from older American Academy students studying here.

Did you consider studying anywhere else? What are the main reasons you chose Warwick?

Secondly, the University has a very convenient location; Warwick is located at the heart of England, which makes it very easy to travel to different destinations throughout the UK. Added to this, it is extremely close to Birmingham Airport (I needed approximately 15 minutes to get from my accommodation to the airport).

Thirdly, Warwick is a campus university, which is safer than a city and it is also easier to socialise and make new friends.

When you found out about Warwick, did you contact the University to find out more?

My school academic counselors were very helpful, thus there was no need to contact the University for further information.

Did you receive any help with your application form? Did you encounter any difficulties?

I applied with the help of the school academic counselors and did not face any difficulties. I contacted Photiades Education, for advice about choosing accommodation and the accommodation process.

How was your arrival and orientation? Where were your first impressions?

My arrival and orientation proceeded smoothly, as they were very well organized by the University. What impressed me the most about Warwick was how beautiful and lively the campus was.

What is the best thing about Warwick?

In my opinion, the best thing about Warwick is the closeness of the student community and the way all students were united in some events, such as watching Eurovision or football games at the Piazza.

What is the worst thing about Warwick?

My only negative comment about Warwick would be the stressful exam period. However, exams are always stressful, and the University provides a lot of support during this stressful period.

During my first year at Warwick, I stayed at Sherbourne. Even though it does not have a central location on campus, like some other halls, it is no longer than 15 minutes away from central campus and the library, on foot. It is, however, very close to Warwick Business School and Ramphal (approximately 6 minutes), which is where most of my lectures were held during the second term. Also, the route from Sherbourne to the central campus is scenic, especially the lake near WBS, which made walking to central campus even more enjoyable.

Have you joined any societies?

I initially joined many societies, including Unicef, Women for Women International and the Cypriot and Hellenic Society. I was mostly involved with the latter, which organised a plethora of events during Welcome Week to help with orientation, such as a campus tour, as well as social events. I also participated as a singer in one of the events organized by the society, which was a very enjoyable and fulfilling experience.

Have you travelled in the UK/Europe?

I have travelled to the two nearest cities to the University – Coventry and Leamington Spa. Coventry is closer to the University than Leamington Spa, which is why I chose to stay in Coventry for my second year at Warwick. Both cities are beautiful and are student-friendly. Being a Shakespeare fan, I travelled to Stratford-upon-Avon, something which I would highly recommend, as Shakespeare’s birthplace. I have also travelled to Birmingham by train, which is very close and has a great shopping centre, and have visited Sheffield, 2 hours away by train, and I also visited London, which is only around an hour away from Coventry Train Station.

What do you hope to do when you graduate?

Upon graduation, I hope to commence employment as an ACA trainee in one of the big four accountancy firms, either in Cyprus or the UK.

What one thing makes you happy about Warwick?

Nature! The University is surrounded by breathtakingly beautiful nature and wildlife, such as ducks, squirrels, bunnies and even foxes! Walking alongside ducks and geese on my way to my lectures is one of the things I will miss the most about living on campus.

If you were giving advice to someone considering studying at Warwick, what advice would you give them?

My advice would be to research thoroughly the University and make an informed decision without being influenced by others. A common belief about campus universities is that they do not provide as much a fulfilling student experience as city-located universities do, which is not true. Simply researching the University of Warwick and speaking with students studying there can make one understand that Warwick is not only one of the best universities in the UK, but also one of the universities that provide a rewarding student experience. Regarding personal statements, my only advice would be to simply be yourself.