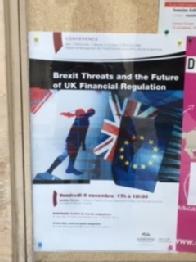 On 9th November 2018 I delivered a talk at the Institut du Monde Anglophone at the Université Sorbonne Nouvelle Paris 3. The talk was entitled, 'Brexit Threats and the Future of UK Financial Regulation'. The paper was designed to show in how many different directions the Conservative Party was pulling itself at that time over what to do about Brexit and how the City of London would fit into the post-Brexit global financial landscape. Global financial markets will inevitably be remade once Brexit frees the City from regulatory oversight from the European Commission, and the best bet at the time of delivering the presentation was that this would be in response to the City increasingly incorporating itself within the type of minimalist regulation usually associated with offshore financial centres. The paper was delivered one week before Theresa May presented her withdrawal agreement to a fractious Cabinet and an even more fractious Parliament, and at that time two potential models of the new regulatory future were still being discussed. One was the so-called Jersey Model, in which the UK would continue to follow EU rules for the trade in goods but not for the trade in services. The other was the so-called Singapore-on-Thames Model, in which a free-wheeling 'Global Britain' would seek to gain competitive advantage through regulatory undercutting. Both models seemed to me to point in the same direction when it comes to the question of how the City would in future be inserted into global financial markets. Both appeared to point to the British financial services industry being compensated for the loss of passporting rights within the EU financial space by being allowed pretty much to write its own regulatory system.