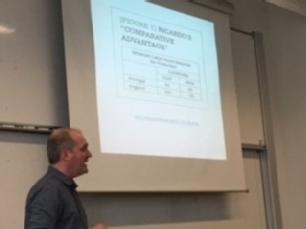 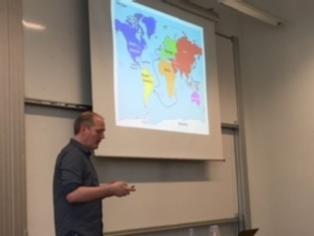 On May 17th 2018 I delivered a paper to the Department of Political Science Seminar Series at the University of Copenhagen. The paper was entitled, 'The Said, the Unsaid and the Unsayable in Ricardo's Theory of Comparative Advantage'.

Abstract: Ricardo is simultaneously everywhere and nowhere in IPE. IPE textbooks ritually nod in deference to the significant role he played in the field's historical back-story, and his theory of comparative advantage continues to be central to the underlying economic ethic of the liberal perspective that dominates the field. Yet it is extremely rare for any IPE scholar to offer anything beyond the most superficial insights into the content of Ricardo's economics. When the textbooks focus on what he said, then, what is being presented is less his own voice articulating his own ideas than a second- or even third-hand account of a deeply canonised Ricardo. I wish to push this line of argument two stages further in this paper, noting how a focus on what is said also facilitates a further focus on what is left unsaid and what was almost certainly unsayable in the prevailing political context. The dimensions of both the unsaid and the unsayable are very revealing in Ricardo's case. (1) Ricardo presented his theory of comparative advantage as a universally applicable account of the efficiency of the free trade solution, but he neglected to mention the actual trading relationship between English cloth and Portuguese wine that lay behind his numerical example of comparative advantage. This was rooted in deeply asymmetric treaty obligations that distorted the development of the Portuguese economy and that revolved around eighteenth-century European inter-imperial wars and Britain's ever deeper involvement in the transatlantic slave trade. It is hard to believe that this neglect was anything other than deliberate. However, (2) it must also be recognised that the political context in which Ricardo was writing was far from permissive. A whole host of restrictions on civil liberties were in operation for most of his adult life and served as a constant backdrop to his Principles of Political Economy. His theory of comparative advantage is generally treated as being one of the most important examples of his latterly much criticised tendency towards market-based abstraction. Yet to have attacked the treaty basis of the British economy, even to have commented upon treaties that worked as much in Britain's favour as the one that regulated the trade of English cloth for Portuguese wine, was a potentially treasonable offence throughout the period in which the three editions of the Principles were published. Ricardo's silences might therefore prove to have been a complex mixture of the unsaid and the unsayable.