Communities and Algorithms: Epistemological Questions for a Critical Network Science

The CDI is delighted to host Dominik Schindler and Matthew Fuller, who will share their current research, Communities and Algorithms: Epistemological Questions for a Critical Network Science, with the CDI community at Warwick. The talk is facilitated by British Academy Posdoctoral Fellow Patrick Brian Smith.

Register: please email patrick.smith.1@warwick.ac.uk to register your interest to attend. 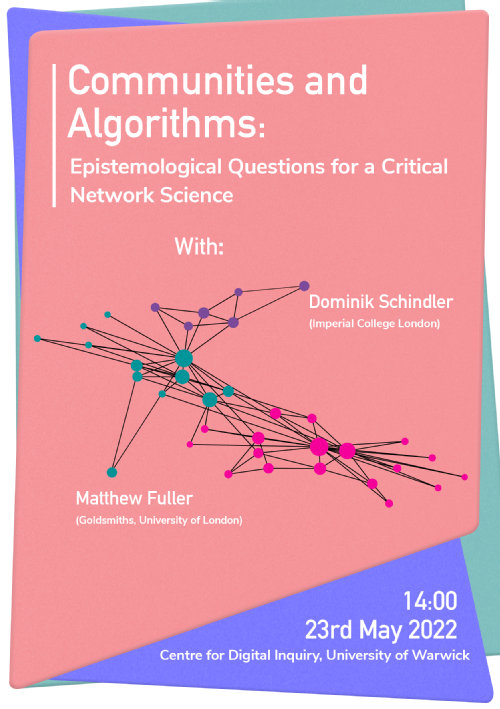 In network science the term ‘community’ was first introduced in a key paper by Girvan and Newman from 2002 to describe a computable object aimed at revealing certain kinds of groupings observed in (social) networks [1]. In this context, community is a highly partial term compared to its wider uses. Nevertheless it is one that is taken to have great explanatory power in that it is able to trace certain kinds of, what are taken to be, spontaneous and emergent order in (social) interactions. This consideration also gives ‘community detection’ algorithms great economic and political value as well as cultural significance.

After the original formulation of the community detection problem, Girvan and Newman pro- posed the framework of ‘modularity optimisation’ in a series of follow-up papers to determine communities as a state of relations amongst groups of entities described by graphs [2, 3]. Since then a large body of literature has evolved and there are substantial investments in the main- tenance and development of techniques for community detection [4]. However, the field remains contested and recent approaches, e.g. inferential methods from Bayesian statistics, challenge tra- ditional techniques like modularity optimisation, which some authors even depreciate as merely ‘descriptive’ [5, 6]. Despite such controversies, the ‘Louvain algorithm’ introduced in 2008 [7] remains one of the standard methods for community detection and is based on modularity opti- misation. Embedded in the Gephi software popular among computational social scientists, and in many other contexts, the Louvain algorithm has become a ubiquitous tool for the understanding of social networks [8]. We provide a short analysis of the operation of this algorithm.

Perhaps due to its productive facility, the mathematical object ‘community’ has remained ambivalent and never precisely defined, something emphasised in recent critical takes on com- munity detection [9, 10]. In turn, the communities one computes only very partially correspond to the communities of worldly and human interaction. A further complication of the question is the way in which communities are also produced in contexts—such as social media—that are structured through kinds of community models and analyses (e.g. homophily) that are strongly related to the graphs of community detection [11, 12]. What kind of abstractions [13] operate in such contexts and how can critical attention work through the epistemological conditions latent to them? Communities may form around the armature provided by abstractions of communities and therefore critical understanding of the operation of these ‘real abstractions’ and metaphors might contribute to reflexively critical forms of community self-awareness.

In order to contribute to such work we evaluate some of the ways in which mathematical and computational practices assess and frame their forms of knowledge. Blondel et al. describe the Louvain algorithm as a ‘heuristic method’ to approximate the problem of modularity optimisa- tion [7]. Heuristics describes a form of axiomatic approximation. We carry out a genealogy of the term ‘heuristic’, through its gestation in the early period of artificial intelligence and onwards [14, 15]. We propose that heuristics may potentially be a route to reflecting on the limits and wider dispositions of algorithmic knowledge.

This motivates us to focus on community detection as a set of mathematical heuristics that can be used in ways that are potentially attuned to their limitations. Building on this, we propose a critical heuristics in network science that has the capacity to both recognise and profit from its constructed nature and to proceed via humble epistemological claims and a heuristics that is more tactical, provisional and contingent. In a sense we want to suggest that a ‘no free lunch’ argument, in which every algorithm has its costs, can also be made at a deeper epistemological level.

9. Peel, L., Larremore, D. B. & Clauset, A. The ground truth about metadata and community detection