Creating an Instrument of Experience for Learning

Experiential learning is not a passive process, rather it is an activity in which students deliberately act on/in the world, predicting, doing, observing, reflecting and re-acting: the feedback loop through which we explore realities. Learning in all disciplines involves the creation of what could be called instruments of experience1: things that we can create and use based upon our theories (implicit or explicit), providing sufficient opportunity to observe, reflect and re-act. What Tom Kelley of IDEO calls "building to think".

Professor Carol Rutter, along with students, actors and Globe Education, constructed just such an instrument of experience at the Globe Theatre. It was constructed from two early versions of Shakespeare’s Othello, along with period stage costumes, rehearsal spaces, the Globe stage, and the knowledge and skills of the actors. When deployed, the instrument worked as a kind of experiment (testing theories about staging the different versions), but also as an experiential discovery on many levels for all of the participants. As Carol states in her introduction:

The project records practical experiments conducted on the stages of Shakespeare’s (reconstructed) Globe using reconstructions of early modern dress to argue that the scene’s “meaning” resides in the undressing and to demonstrate how that undressing was done. It concludes that Q is not an actors’ text.

A still from the movie.

The Unpinning Desdemona experience proved to be rich in opportunities and detail, as expected. From the outset, Professor Rutter built observation and reflection into the plan. All of the activities, over the whole day, were filmed and photographed, including the process of dressing, the various rehearsals with different combinations of text and costume, and the performance on stage (of the Willow scene).

Learning is a multimedia experience

The Unpinning Desdemona experience was necessarily rich and mulimediated. To recompose it for reflection means bringing together a large amount of quite visually rich video footage with audio (spoken word and music), filled with many individual events and observations, along with the texts and the un-expressed thoughts and sensations of the participants. We don’t want to lose too much of that complexity, as it’s what makes the experience potentially so productive. But the participants do need to be able to draw it all together selectively so as to create a narrative that reflects and draws conclusions (re-acts, learns). How can technology help?

Why use an iMac?

As part of the Open-space Learning project, I am exploring ways in which participants can gather a rich account of events in a manageable format, and then quickly and intuitively build a narrative. In this particular case, we used iMovie 09, the video editing and production application that comes free with every new Apple computer. Working with the actor Jon Trenchard, Carol spent a couple of days with an Apple iMac in the Writers’ Room at Warwick. It’s 24” screen allows editors to easily view a large proportion of their footage and still images for review without too much scrolling around. The end result is impressive and fascinating: an hour long movie, in ten sections, that explores the performance experiment, explaining the differences between the texts, how they might have been performed, and the implications for how we understand and study the relationship between text and performance. The movies can be viewed online, and will be used in teaching and research (address given below).

For this kind of learning through video making, I chose the combination of iMac and iMovie 09 over many other options (including Apple Final Cut and Adobe Premiere). iMovie is aimed at the novice video maker. It is to some extent simplified. I have been able to teach people to use it in just ten minutes. But that’s not the reason for choosing it. In fact, the latest version is barely less sophisticated than applications used by professionals. I choose iMovie because it makes it easy for students and researchers to quickly explore, select and combine sequences of video from hours of footage (as well as images). Footage is instantly rendered. By moving the mouse pointer across the footage, the playhead performs audio and video skimming. Whatever the mouse is hovered over plays instantly in a preview window, and as the mouse is moved, the audio is played as well. When researchers and students are concentrating on understanding difficult content, creating difficult ideas, they have to be able to do this as smoothly as possible, as quickly as possible. iMovie 09 is perfect. To build their narrative, the editors select clips from the footage (click and drag), play the selected clip to review it (/ button), and then move them into the correct point in the movie timeline (drag and drop). Images can be added in a similar manner. Stills can be created from any point in the video footage and added to the movie (building a movie from stills, with zooming and camera drift effects is in itself worthwhile). 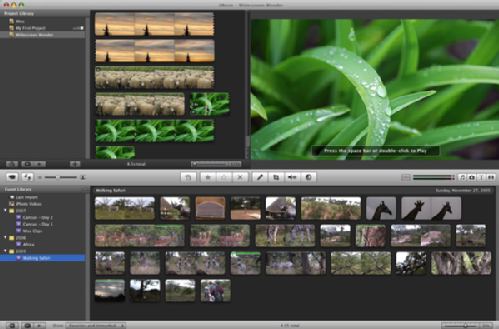 As Carol and Jon created their video, I filmed their behaviour. I then interviewed them about the process to create the Making of Unpinning Desdemona video (included below). Watch the movie and you will find a Professor and an actor using iMovie to “build to think, build to learn”. It’s not just the ease of reviewing footage and building movie sequences that makes this such a great tool for thinking. iMovie 09 also includes the ability to add many types of text title. They can stand alone (for example to demarcate a point in the structure of the narrative), or they can overlay the footage (to point out a detail or add information). There are animated titles to add interest, scrolling subtitles to extend the information given. All added by simple drag-and-drop, but looking like the work of a professional. Adding audio is just as simple (copyright permitting). Nice or novelty transitions are available to smooth the gaps between clips. As all of these get added to the movie timeline, the movie can be reviewed instantly – building to think.

There are three further features that Carol and Jon found to be especially vital for creating this kind of movie. We can drag and drop any image or clip over another in the timeline. Several options appear on a menu (you need to active the advanced editing tools in iMovie preferences to get this). Two that are particular useful are cutaways and picture-in-picture. Cutaways allow us to show a short clip as the main clip carries on playing – don’t forget to mute the audio on the cutaway. Picture-in-picture inserts the second clip as a small frame in the corner of the first (it can be repositioned). Carol and Jon used cutaways to show action on stage from several angles.

Finally, the perfect build to think feature: voiceovers. The iMac has a quite good quality mic (as well as an excellent video camera). Voiceovers can be recorded into iMovie and layered over the movie, repositioned and edited. The background audio can be muted, or “ducked” (with its volume automatically dropped in sync with the voiceover). In the Making Of video, you can see Carol and Jon doing just such a voiceover. If necessary, you can also record video straight into iMovie using the built in camera (for example to record an introduction).

Many of these features are available in different systems, but my experience has taught me that when working with novices to create movies that deal with difficult academic topics, the software and hardware needs to be as slick, simple and integrated as possible. iMovie 09 offers that. It’s an ideal addition to your instruments of experience, supporting a creative and wide ranging reflectivity – 10/10.

The Making of Unpinning Desdemona

Unpinning Desdemona the Movie by Carol Rutter and Jon Trenchard

If you want to comment on this, please use the original OSL Observatory blog entry.

1 In Experience and Education, Dewey writes of "a potent instrumentality for dealing effectively with the future" (Dewey, 1997: 23)