Accounting for the Great Divergence

This paper “accounts” for the Great Divergence between Europe and Asia in two ways. In the sense of measurement: (1) the traditional view, in which the Great Divergence had late medieval origins and was already well under way during the early modern period, is confirmed (2) However, revisionists are correct to point to regional variation within both continents (3) There was a Little Divergence within Europe, with a reversal of fortunes between the North Sea Area and Mediterranean Europe. (4) There was a Little Divergence within Asia, with Japan overtaking China and India. However, Japan started at a lower level of per capita income than the North Sea Area and grew at a slower rate, so continued to fall behind until after the Meiji Restoration of 1868. Any explanation needs to be able to account for the Little Divergences within Europe and Asia as well as the Great Divergence between the two continents. The divergences arose from the differential impact of shocks hitting economies with different structural features. The structural factors include: (1) The large share of pastoral farming in agriculture which helped to put the North Sea Area on the path to high-value-added, capital-intensive, non-human-energy intensive production. (2) Late marriage in the North Sea Area, which lowered fertility and encouraged human capital formation (3) Labour supply, with an industrious revolution helping to explain the Little Divergences within both Asia and Europe (4) Institutions, with the role of the state helping to explain the success of the North Sea Area. The two key shocks were (1) The Black Death, which led to a permanent per capita income gain in the North Sea Area, but not in the rest of Eurasia (2) The new trade routes which opened up from Europe to Asia and the Americas around 1500. 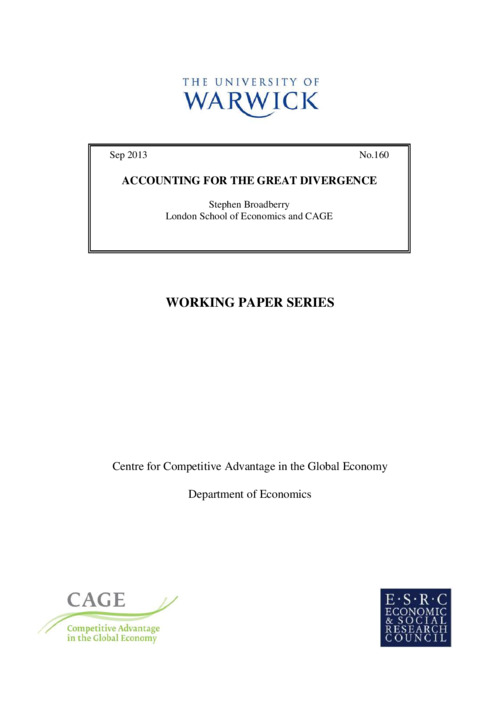