This paper analyses the effects of the reforms initiated in India following the balance of payments (BOP) crisis of 1991 on economic performance. We do not find persuasive the contention of many analysts that growth accelerated after the mid-1980s when reforms were initiated. Nor does statistical analysis support the contention that reforms in the mid-1980s resulted in a growth acceleration. We show that there is an accelerating rate of growth of GDP after the mid 1970s and it is difficult to relate this gradual acceleration to specific policy changes. The changed policies in the 1980s did not mean a basic change in the policy framework. Furthermore, since corporate investment as a share of GDP did not increase in the 1980s it is difficult to identify the mechanism by which the more pro-business policies of the government were translated to higher growth as claimed by Rodrik and Subramaniam (2005).We show that increasing exports of goods, non-factor services, and labour services, through remittances, played an important role in growth in India. Furthermore, the share of exports of goods and services grew as rapidly in India as in China, so that it cannot be said that growth in India was based more on domestic demand. The increased value of exports of manufactures was important as their value grew from about 16 percent of the manufacturing sector’s value added in the early 1980s to about 60 percent currently. Also, there is no significant difference between the growth rates of value-added in the manufacturing and services sectors except for the period of the Ninth Plan (1997-2001).We find that most of 12 economic indicators show improved performance in the decade 2001-10 compared to the earlier decade 1981-1990. The better performance consisted both in the level and lower variability. Furthermore, we find that the reforms had a gradual effect; the change in the period 1992-2000 was smaller and statistically less significant. We also find that the differences with East Asia and particularly China depend on the basis of the comparison. We compare changes in performance since the reforms, which started in China in 1979 and in India in 1991. Such a comparison shows more similarities than differences. We finally examine social progress. We find that South Asia lags behind other regions in making progress towards the Millennium Development Goals (MDGs) and India lags behind other South Asian countries. The responsiveness of the improvement in the MDGs to increases in per capita income is usually low in Asia and particularly in India. 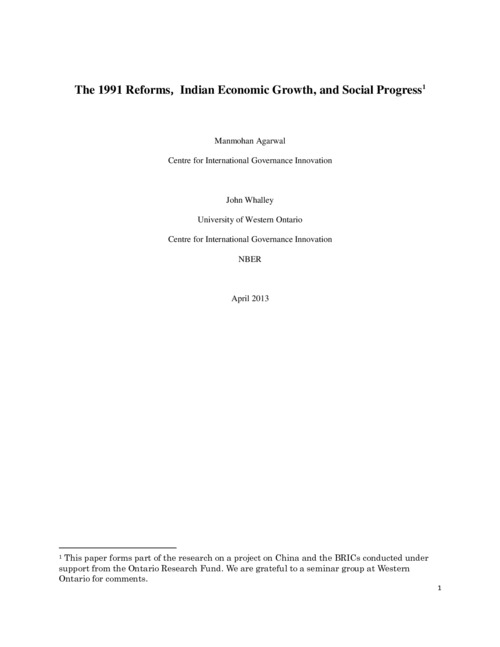