This paper examines how natural disasters affect low public finances and their interplay with intergovernmental transfers and external resources. We document the causal effect of a natural disaster on the allocation of local public resources the local government fiscal dynamics by exploiting the random nature of the 2013 Typhoon Haiyan, one of the most devastating natural disasters in recent history. Combining data on local government finance with reports on the level of damages caused by the typhoon, we employ several estimation strategies: we first rely on difference-in-differences and event study designs, and we further address a potential endogeneity concern by instrumenting the intensity exposure to the typhoon with distance to the storm path. We show that local revenue and public expenditures remain largely unaffected, except debt service, which are on average 15% lower in affected cities or municipalities. However, we document important heterogeneity in local revenue responses. We find no support for the moral hazard problem: our results indicate that external aid leads to higher local expenditures, particularly general public services, socioeconomic expenditures, including education and social services, and debt payments. These results highlight the crucial role of central government transfers in supporting local governments and mitigating the geographical economic disparities in the aftermath of exogenous shocks such as natural disasters. 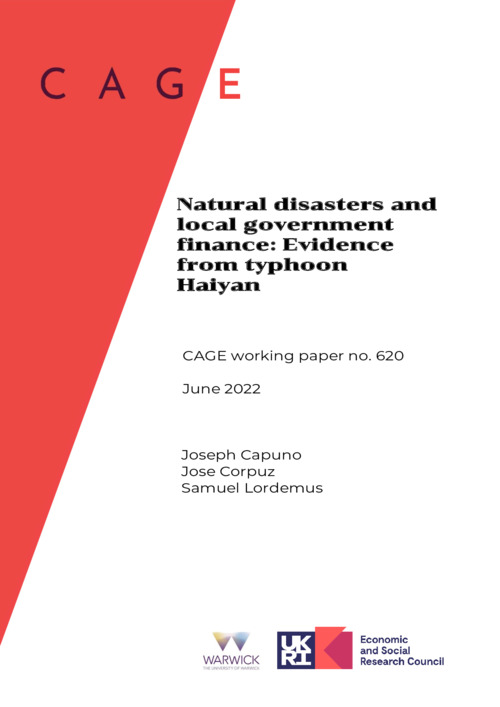