It is with sadness that we must share the death after a short illness of our colleague, Emeritus Professor, Jim Beckford. The Department and the University of Warwick more generally were an important part of Jim's career and life. He served the Department of Sociology in a number of capacities, including Head of Department, and was a valued member of our community. He was a key figure in the sociological study of religion and was an active participant in debates and discussions in this area. We mourn his loss and treasure his important role in the development of the Department of Sociology, and University.

Following posts at the Universities of Reading and Durham, Jim joined the Department in 1989 from a Chair at Loyola University, Chicago. By this point he had already developed an international profile as one of the key figures in the Sociology of Religion and Sociology of Culture. Indeed, he had only recently been elected President of the Association for the Sociology of Religion, 1988-1989. Once at Warwick his reputation and international stature blossomed, culminating in his election as Fellow of the British Academy in 2004.

Although rightly seen as a prominent social theorist, Jim was above all a great communicator. He had little time for 'theory for theory's sake'. That shows is his vast body of published work: from his first book based on his PhD research, 'The Trumpet of Prophesy: A Sociological Study of Jehovah's Witnesses' (1975) to his 'Social Theory and Religion' (2003) and then his groundbreaking study 'Muslims in Prison: Challenge and Change in Britain and France' (2005, with Danie`le Joly and Farhad Khosrokhavar).

The latter work demonstrated even more clearly than previously a commitment to addressing contemporary issues faced by socially marginalised groups, not least those subjected to racism and Islamophobia. This led to his close association with the Department's Centre for Rights, Equality and Diversity.

This provides a glimpse into his general character and moral commitments. He was above all else a thoroughly decent, caring and warm person who exuded an overriding sense of calm reassurance. Those of us who were privileged to know him cannot but feel a deep sense of emptiness. The Department has lost a colleague who gave his all to our collective endeavours. He retired, theoretically, in 2008, but in fact he never really stopped working. As Emeritus Professor, he never ceased to amaze me how active he remained on the academic scene, even talking about being involved in new transnational research projects stretching years into the future.

If I may, by way of conclusion, be permitted a few personal thoughts, I'd like to reflect on my own sense of loss. I'll miss, deeply, evenings spent at a local hostelry in Kenilworth, where he would regale me with endless tales of all things Japan, and especially Japanese railways, a passion we shared. His characteristic tenacity, commitment and thoroughness was applied, in later life, to the study of the Japanese language. Not surprisingly, he excelled in what clearly represents no mean feat.

He will be sadly missed by all of us

Professor Sir Robert (Bob) Burgess, who died at age 74 on 21st February 2022, played a major role in shaping the Department of Sociology at Warwick in its formative decades. Having graduated from the University of Durham in 1971, Bob was appointed to a Lectureship at Warwick in 1974; and he completed his PhD there in 1981. He was promoted to Senior Lecturer in 1984 and to Professor in 1988. Bob served as Chair of the Department from 1985 to 1988 and later as Chair of the Faculty of Social Studies as well as the founding Chair of the Board of Graduate Studies. At the same time he founded the Centre for Educational Development, Appraisal and Research (CEDAR) in 1986. The culmination of his many and varied contributions to department and university was his appointment as Senior Pro Vice-Chancellor in 1995.

In 1999 Bob was appointed Vice-Chancellor at the University of Leicester and retired in 2014 as its longest serving Vice-Chancellor. Having presided over many new developments and achievements at Leicester he was knighted in 2010 for services to higher education at local and national levels.

Bob's main contributions to teaching, research and supervision at Warwick centred on the sociology of education and on the refinement of qualitative research methods in their practical application to education at all levels. His many publications (such as Experiencing Comprehensive Education: a Study of Bishop McGregor School (1983), Education, Schools and Schooling (1985), The Ethics of Educational Research (1989), Research Methods (1993)) were both innovative and influential. The fact that CEDAR, now re-located within the Faculty of Social Studies, remains a vibrant part of the university is testimony to Bob's energy and vision.

Alongside all the distinguished contributions that he made to the success of the Department of Sociology at Warwick and to CEDAR Bob was nevertheless a model citizen of the wider community of sociologists in the UK. In addition to joining the Training Board, the Research Resources Board and the Council of the ESRC he became President of the British Sociological Association in 1988, the founding Chair of the UK Council for Graduate Education, and President of the Association for the Teaching of the Social Sciences. This extraordinarily high level of commitment to the public advancement of sociology and other social sciences was tribute not only to Bob's boundless energy but also to his unwavering goal of defending and promoting the social sciences in British higher education. For more details on how this side of his professional service went on to flourish after his departure from Warwick, see the obituary at:https://le.ac.uk/about/history/obituaries/2022/sir-bob-burgess

Bob was a consummate "committee man" who not only revelled in the intricacies of committee procedures but who also had a fine sense for the broadly political considerations of decision-making at the level of Faculties and Senate. He actually seemed to enjoy preparing for meetings and participating fully in the discussions. At the same time, Bob's temperament was invariably polite and gentle. He got annoyed at times when he thought that wrong decisions were being made or were being forced through against reasonable doubt. But he never allowed his annoyance to express itself in other than reasoned argument.

One of the remarkable things about Bob was that, for all his interest in research methods and in efficient administration, he was hopeless with IT. There was a computer in his department office, but rumour had it that he didn't know how to switch it on. I never saw him using it. In addition, his office was best described as "a tip", with books and papers piled up on all available surfaces (including chairs and window sills).

Bob Burgess will be remembered with respect and affection at Warwick for his unpretentious, easy-going personal manner, his ability to get on well with people at all levels of institutions, the impressive stamina with which he pursued his ambitions and his unswerving determination to achieve the highest standards in research, teaching and professional service. 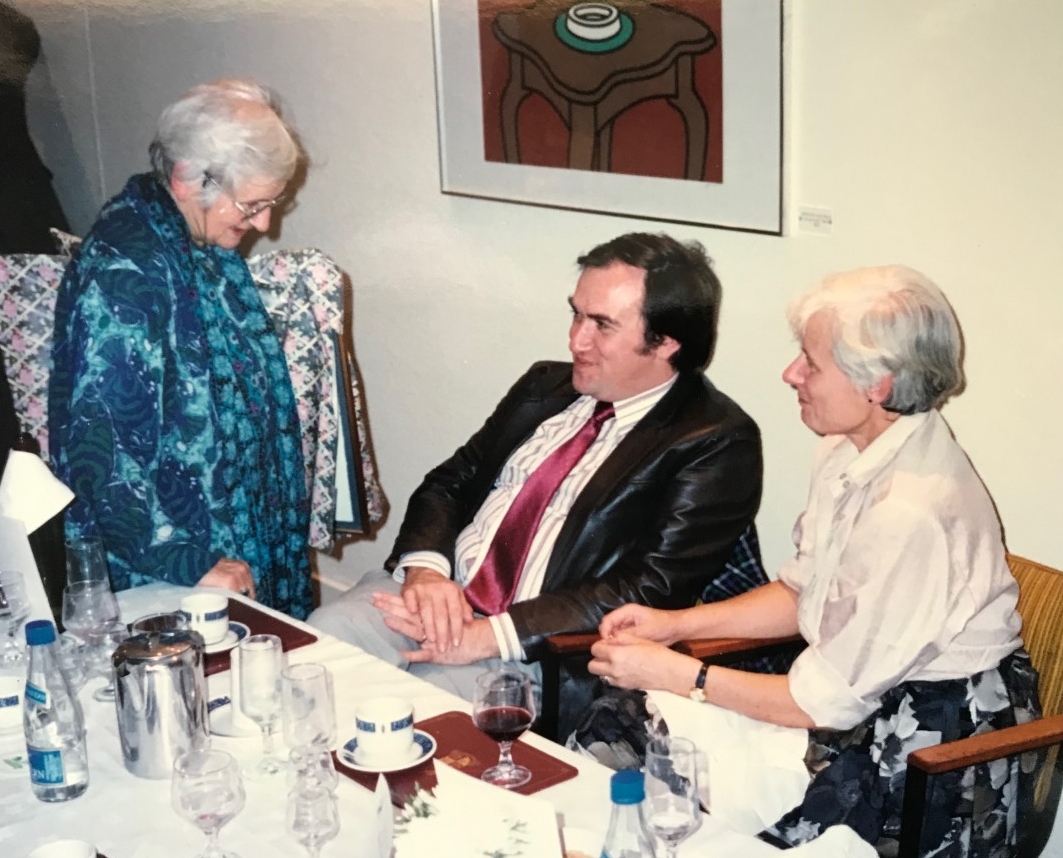 Are you interested in developing your skills, enhancing the student experience, and being paid in the process?

The Department of Sociology is currently inviting applications from finalist students for a number of 'Student Voice' Ambassador roles. Ambassadors will act as an interface between students and staff, feeding back both ways. The role will include, for example, inputting into departmental discussions on teaching policy and curriculum change.

If you are interested in this role, please send your CV and a supporting statement (of up to 350 words) outlining why you feel you would make a good 'Student Voice' Ambassador to the department’s Director of Student Experience, Dr Andre Celtel (A.Celtel@warwick.ac.uk).

The closing date for applications is 2 pm on Thursday 03 October 2019.

Congratulations to Dr Khursheed Wadia whose book - jointly authored with Daniele Joly - won the PSA's WJM Mackenzie prize for "The best book in political science" for 2017-18.

The latest edition of Toxic News is now available

The Toxic News e-magazine was conceived as a result of the European Research Commission funded project Toxic Expertise hosted by the Sociology Department. The project examines competing claims about the health effects of pollution, focusing on the global petrochemical industry.

The Department's Feminist Pedagogy / Feminist Activism Student's are organising a feminist art fair & zine making workshop for International Women's Day 2019. Stop by and join them in the Oculus (OC0.04) from 11:15am.

Sociology undergraduate Lanaire Aderemi will be presenting research at BCUR 2019

Sociology undergraduate Lanaire Aderemi will be presenting her research at this year's British Conference of Undergraduate Research (BCUR). Her paper is titled 'The Biafran War: the politics of remembering, misremembering and forgetting' Click here to read her research abstract.

This year's conference will be held in Cardiff on 15 & 16 April and further information can be found at: https://www.bcur.org/

Sociology students and staff are invited to attend this year's Warwick ASEAN Conference which aims to connect students interested in Southeast Asia with thought leaders about the region, and foster a community passionate about the future of ASEAN. The theme for this year's conference is Forging the Future; prompting self-reflection and evaluation of ASEAN's present challenges.

Held on 23 February, this all day event will be filled with panel discussions with esteemed speakers, embassy engagement sessions, career workshops, a Southeast Asian food fair, and more! For more information, visit the Facebook page at www.facebook.com/warwickaseanconference.

The Black Women's Project presents to you it's annual conference. This year it's called Unleash! We want black females at Warwick to recognise their importance and worth in society. This conference will include speakers such as Ashleigh Jade, an inspirational London based influencer, Film Director and Photographer; Yasmin Elizabeth - self love advocate, influencer and entrepreneur ; and Courtney Daniella Boateng, a YouTuber, influencer and entrepreneur. Do make sure to come and be inspired on how to navigate yourself in society as black woman.

This year, Warwick will be holding a Wellbeing Week to promote the support which is available and communicate key messages on wellbeing, including healthy lifestyles, physical health and activity, mental health, and financial wellbeing. You can see a list of events taking place each day here.