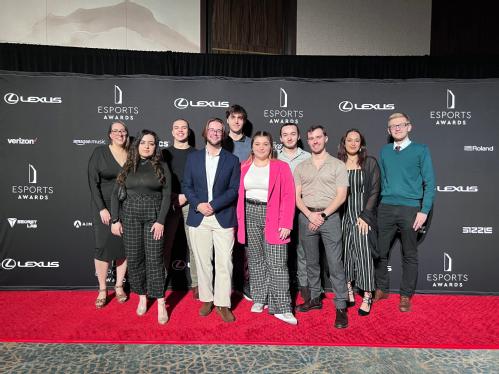 The University of Warwick ranked 2nd in the world in The Esports collegiate Program of the year.

Jack, 24, studied Language, Culture, and Communication at Warwick and founded Warwick Esports, the student club, with four other students while he was studying.

He said: “It’s a dream come true to be ranked in the top three in the world for these awards – it’s thrilling on a personal level but also means so much for the future of the 3,000 strong esports community at Warwick. We’ve shown that we’re internationally competitive which makes me so excited for our student players and wider community as we look forward to next year. My passion has turned into a career and I’m excited that this win will really help us to grow and that it will really put us on the map globally which will lead to lots of exciting opportunities for other young esports enthusiasts like me.”

President of the Warwick Esports Student Society, Kat Emery said “This is amazing –– the US collegiate scene is so much more established than the UK scene so it’s a really significant win. It’s very hard for the UK to compete with their wealth of scholarships, sponsorships, and fully funded programs – we were lucky that Warwick was able to support through the Lord Rootes Fund with our travel expenses. We’re also all going to the LVL UP conference while we’re here so we’ll be learning as well. It was incredible to meet people at the top of the esports industry.”

Warwick University is located in the so-called Silicon Spa – the biggest games production and development hub outside London. The university is unique in the UK for investing a small yet mighty staff team and a dedicated centre for excellence in Esports that is student-focussed and collaborative in its nature. The Esports Centre aims to maximise the opportunities offered by the region’s ﬂourishing creative industries cluster and offers a diverse range of services and programmes that champion engagement, nurture and support innovation and boost talent development working locally, nationally and globally.

Combining their four-time national championship winning student club with a state-of-the-art Esports Centre, they have welcomed over 3,000 people in the last year and been able to connect with industry not just for the benefit of their students, but for the wider West Midlands and beyond. Over 1,000 young people across three youth programmes including 100 who were disengaged with education, training and employment post-pandemic have come to the centre with esports being a driving force for teaching essential digital skills.

This passionate student community has been able to harness the Esports Centre to compete in gaming tournaments like League of Legends, Valorant and Rocket League. The university has produced alumnus working in the sector such as Yinsu Collins, a well known Esports journalist and games host.

It has also created unique events like the first-ever for UK Typing Tournament. This was spearheaded by a Warwick student esports enthusiast who is one of the world’s fastest typists (competing via online speed-typing platforms). Working with the developer of one of those platforms, Warwick hosted a two-stage open tournament, with a one-week online qualifier that selected 24 finalists who came to Warwick in January 2022 and competed in-person in the Esports Centre for the top spot.

The Typing Tournament involves typing out a line, few lines, or sometimes even whole (or multiple) paragraphs as fast as possible. You get awarded a score depending on speed, accuracy, amount of errors and the highest score wins!

Next Spring, the University of Warwick together with Esports Insider are hosting ESI Next Gen, a conference on 23 March 2023 which will bring together leaders from universities and colleges from across the UK and beyond, alongside those from both the esports and games industries. This will include game developers, publishers, esports teams, tournament operators, education sector service providers, and regional government.

The Esports Centre at The University of Warwick has provided two full-time staff positions and 17 part-time jobs for students. 11 are current students and six are recent graduates.

Over 360 students have been supported through esports related academic programmes.

The Centre is open seven days a week and has provided over 13,400 hours of free gameplay to students.

The Centre has secured £155,200 in grants and funding for digital literacy skills projects for young people aged from 8 – 24 across Warwickshire.

The annual growth of esports is consistently over 15% year-on-year and driving careers in esports and passionate students and young people. Worldwide, by 2025 esports audiences are expected to surpass 1.4 billion and generate $2.89 billion in revenue. Some 8% of the global market is represented by the UK esports sector.