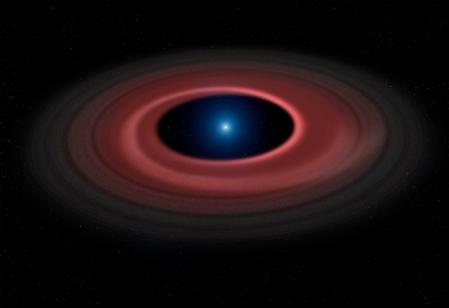 The sight of an asteroid being ripped apart by a dead star and forming a glowing debris ring has been captured in an image for the first time.

Comprised of dust particles and debris, the rings are formed by the star’s gravity tearing apart asteroids that came too close.

Gas produced by collisions among the debris within the ring is illuminated by ultraviolet rays from the star, causing it to emit a dark red glow which the researchers observed and turned into the image of the ring.

Led by Christopher Manser of the University of Warwick’s Astrophysics Group, the researchers investigated the remnants of planetary systems around white dwarf stars; in this instance, SDSS1228+1040.

Whilst similar to the formation of Saturn’s rings, the scale of the white dwarf and its debris is many times greater in size. Christopher Manser explains:

“The diameter of the gap inside of the debris ring is 700,000 kilometres, approximately half the size of the Sun and the same space could fit both Saturn and its rings, which are only around 270,000 km across. At the same time, the white dwarf is seven times smaller than Saturn but weighs 2500 times more”. 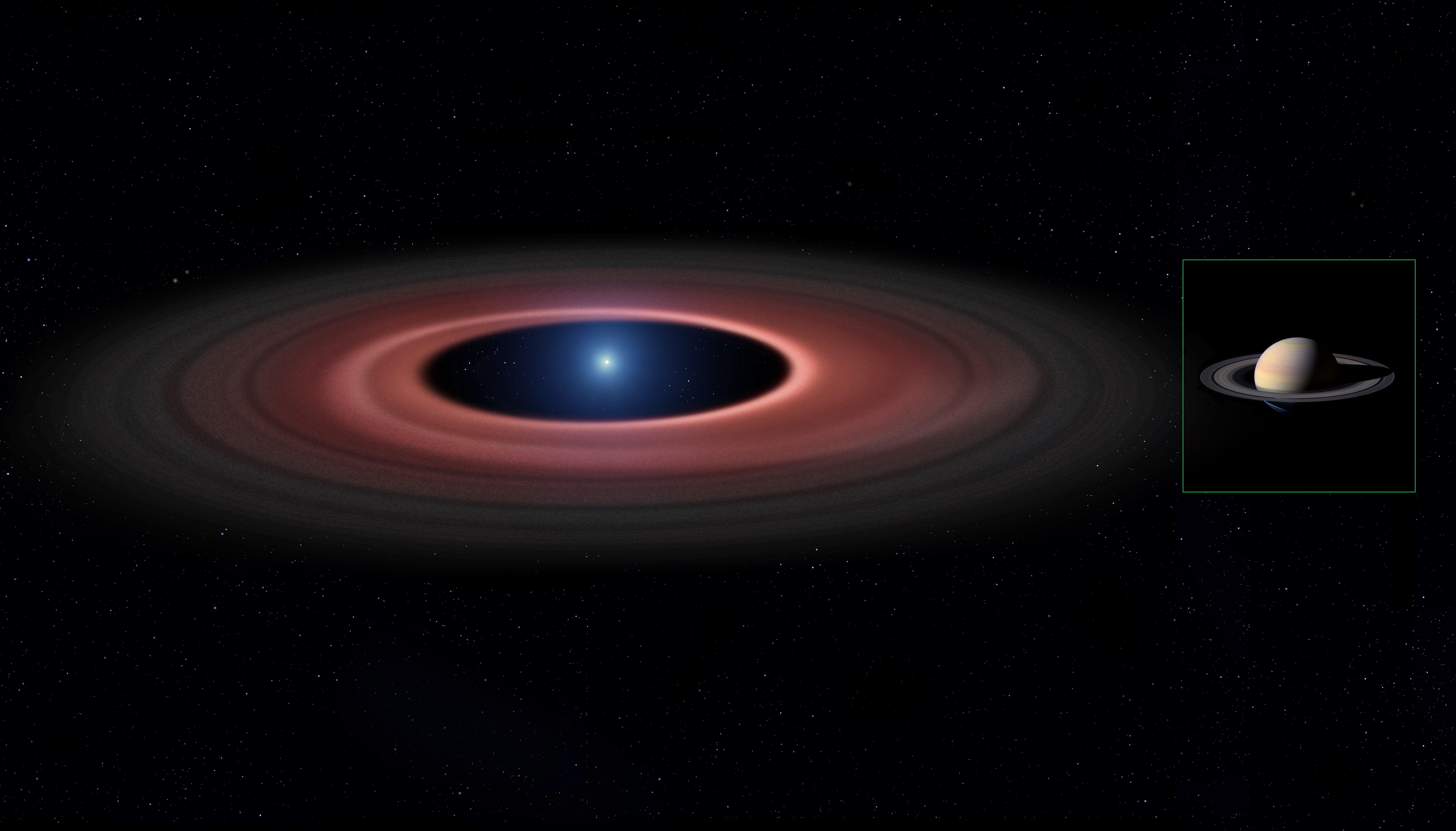 While debris rings have been found at a handful of other white dwarfs, the imaging of SDSS1228+1040 gives an unprecedented insight into the structure of these systems.

“We knew about these debris disks around white dwarfs for over twenty years, but have only now been able to obtain the first image of one of these disks”, says Mr Manser.

To acquire the image the researchers used Doppler tomography, which is very similar to Computed Tomography (CT) routinely used in hospitals. Both methods take scans from many different angles which are then combined in a computer into an image.

While in CT, the machine moves around the patient, the disk the researchers observed is rotating very slowly by itself meaning they had to take data over twelve years. Discussing what the researchers saw in the image Mr Manser says:

“The image we get from the processed data shows us that these systems are truly disc-like, and reveal many structures that we cannot detect in a single snapshot. The image shows a spiral-like structure which we think is related to collisions between dust grains in the debris disc.” 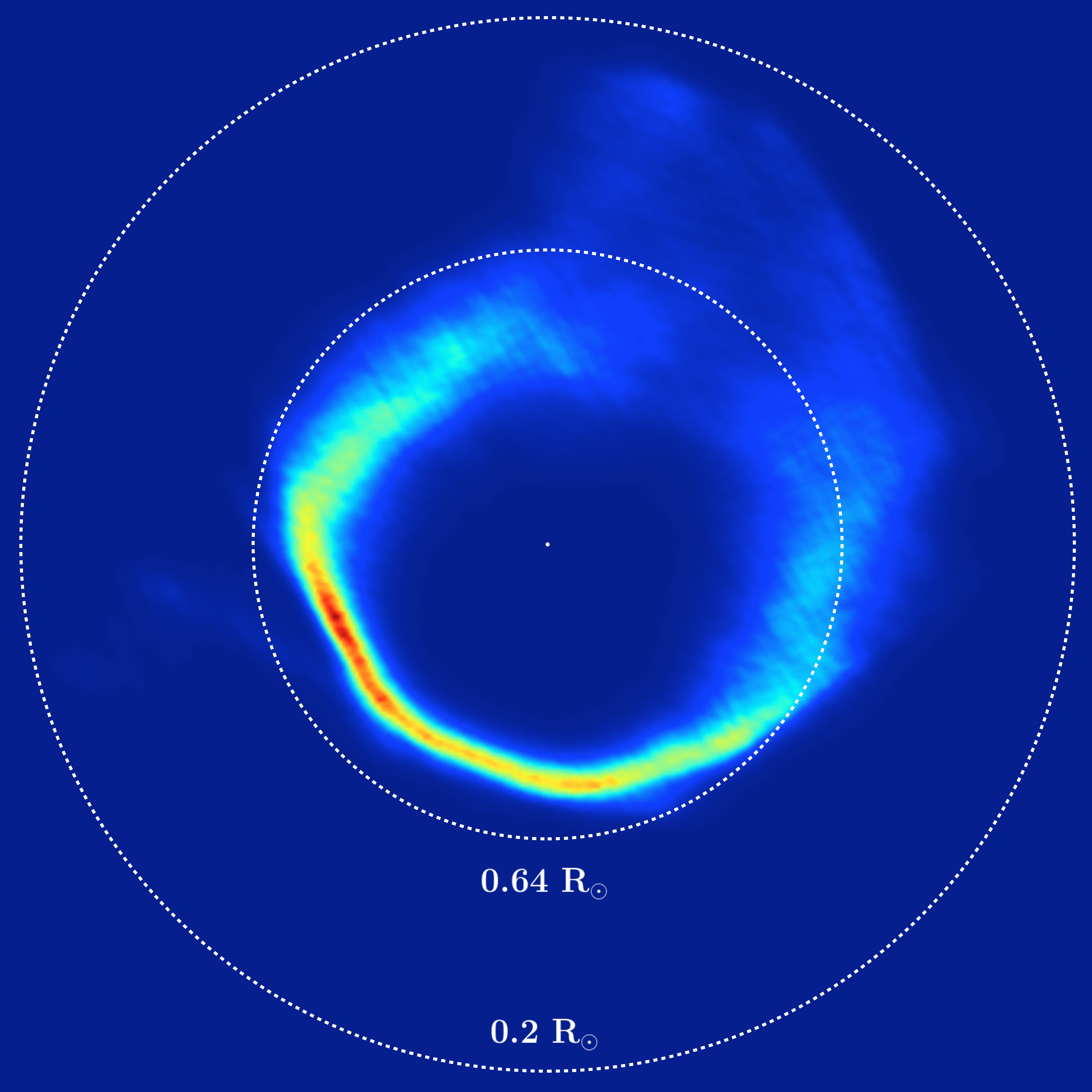 “When we discovered this debris disk orbiting the white dwarf SDSS1228+1040 back in 2006, we thought we saw some signs of an asymmetric shape. However, we could not have imagined the exquisite details that are now visible in this image constructed from twelve years of data - it was definitely worth the wait.”

“Over the past decade, we have learned that remnants of planetary systems around white dwarfs are ubiquitous, and over thirty debris disks have been found by now. While most of them are in a stable state, just like Saturn’s rings, a handful are seen to change, and it is those systems that can tell us something about how these rings are formed.”

The research, Doppler-imaging of the planetary debris disc at the white dwarf SDSS J122859.93+104032.9, is published by the Monthly Notices of the Royal Astronomical Society.