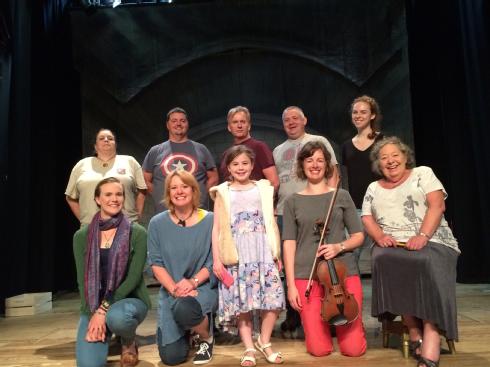 Richmond’s Georgian Theatre Royal and researchers from the University of Warwick are set to stage an authentic Napoleonic era play this Friday evening, in the country’s most complete Georgian playhouse.

A professional orchestra and local community cast will mix comedy and high drama with stirring music, marches and dancing as a life-and-death moral dilemma unfolds as part of the one-off performance.

As part of this August’s Georgian Festival in Richmond, the production of Guilbert de Pixerécourt’s The Fortress on the Danube (1805) will be the first adaptation of the early French melodrama to appear in over a century.

Dr Katherine Astbury, the project’s leader from the University of Warwick, said:

“Over the last four years my research team and I have been working with theatre practitioners and musicians to develop our understanding of performance of French theatre during the Napoleonic period. A public performance of an entire play seemed the logical conclusion to the project.

“The Georgian Theatre Royal, Britain's oldest working theatre in its original form, is the perfect venue and we are delighted that they’ve let us run a community project to coincide with the town’s Georgian Festival. Melodrama was one of the most popular genres across Europe in the early 19th century and the performance of The Fortress on the Danube will give people the chance to act in a play dating from the theatre’s heyday.”

In order to grasp the full complexities of the theatrical scene in the years 1799-1815, the team has worked together to link close textual readings to larger cultural, social and political issues. This has involved research into and analysis of a substantial body of plays from the University of Warwick’s Marandet collection which have never before been the object of systematic study.

Which comes first: love or duty? When Lieutenant Olivier is left in charge of his garrison, he faces an agonising dilemma: help the unjustly imprisoned Evrard escape or save his commander’s life? Can Evrard’s cross-dressing daughter resolve the crisis? Or will the Emperor realise he’s been duped by his courtiers and permit a happy ending? Prepare for musical flourishes and a mix of comedy and high drama as we offer a community performance in translation from this hit melodrama of 1805 with the support of professional musicians. Come and see for yourselves why melodrama dominated the theatres of Europe at the beginning of the 19th century!