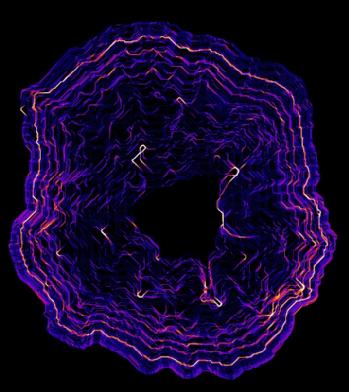 Groups of bacteria use electrical signalling to communicate, new research published in the journal Nature has found.

The electro-communication mechanism was found to be surprisingly similar to action potential mechanism in neurons found in animal brains and central nervous systems.

The research team, including Dr Munehrio Asally of the University of Warwick’s School of Life Science and led by Prof. Gurol Suel, University of California San Diego, found that while individual cells within a biofilm compete for nutrients they also work collectively to protect themselves.

Once the biofilms had been grown, Dr Asally analysed time-lapse images, taken every 10 min, of their development to track the oscillation to ascertain how the bacteria cope with their environment and survive.

“By oscillating, nutrients are able to reach the cells that form the inner region of the biofilm. If the biofilm was not to do so then those inner cells would die and the biofilm would fail to function”, explains Dr Asally.

The research group previously discovered for the first time the oscillation in biofilms.

By providing fresh insight into how biofilms develop and survive Dr Asally argues that the research findings could lead to improved medical treatments by learning how to stop the biofilms of harmful bacteria from oscillating.

The researchers grow biofilms of the bacteria Bacillus subtilis but argue that the oscillation could be common to many different species of bacteria, such as E. coli.

Explaining how he analysed the time-lapse images Dr Asally said:

“Obtained images, which essentially contain four dimensional information, were quantitatively analysed using imageJ, MATLAB and Python. For the growth analysis, we subtracted each frames to detect the regions which showed movements. We wrote scripts to analyse data, so compute can analyse the data even while I am sleeping.”

The research were published this year with the titles of “Metabolic co-dependence gives rise to collective oscillations within biofilms” and “Ion channel enable electrical communication in bacterial communities”. The international research team was led by Dr Gürol M. Süel of the Division of Biological Sciences, University of California San Diego.