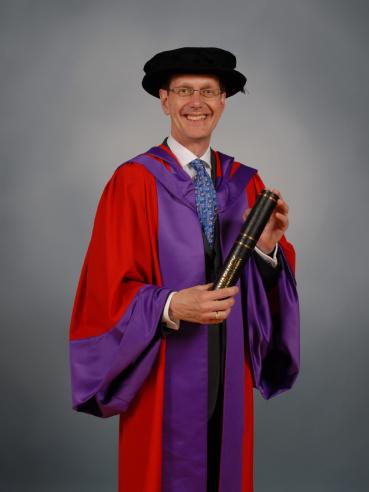 Director-General of the Confederation of British Industry John Cridland has discussed the forthcoming referendum on Britain’s membership of the European Union in an interview to mark being award with an Honorary Doctorate by the University of Warwick.

Describing the referendum as “one of the most important questions of the day”, Mr Cridland said that the overwhelming majority of CBI members want Britain to remain in a reformed European Union;

“They don’t want to leave, but they don’t want the Europe of the status quo. They want a better deal they can be enthusiastic about” said Mr Cridland.

Discussing the reforms the CBI is calling for Mr Cridland argued “We want Europe to do more of what it does well; open markets, and less of what it does badly; regulating our lives. I am confident those reforms can be achieved”.

The awarding of the Honorary Doctorate further strengthens the University’s long-standing relationship with the CBI; former Director General, Sir Richard Lambert, currently serves as the University’s Chancellor and the CBI’s archives are held at the Modern Records Centre.

In the interview, conducted before the ceremony, Mr Cridland said he felt “very honoured and privileged” to receive an Honorary Doctorate from the University of Warwick, which he described as being “one of the world’s very best”, and urged students to spend time investigating the CBI archives to learn how business can do better.

Mr Cridland joined the CBI as a policy adviser in 1982 becoming its youngest ever director in 1991, when he took on its environmental affairs portfolio. He moved to human resources policy in 1995, where he helped negotiate the UK’s first national minimum wage and entry into the EU’s “social chapter” on employment. He became Deputy Director-General of the CBI in 2000.

Listen to the full interview here: