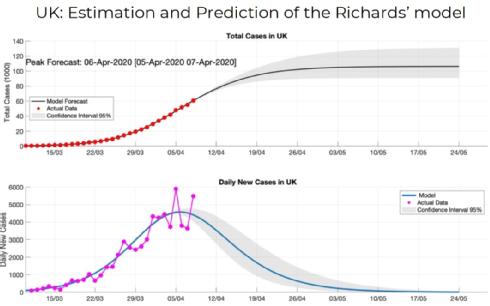 he UK could have zero new cases as early as 10th May, but no later than the end of May, new research conducted by the University of Warwick suggests.

Dr. Pancrazi has applied the Richards phenomenological model for predicting the pattern of an outbreak to the case of the UK. This model has been used to assist the trajectory of previous outbreaks including H1N1, SARS, Ebola and the COVID-19 outbreak in China.

“Understanding and predicting the evolution of outbreaks is crucial for policymakers, as they face the trade-off between limiting social interaction and avoiding a further spread of the disease. Using official data on new cases for the four nations and England’s NHS regions, I estimate a Richards’ phenological model to forecast their Covid-19 evolution. I also adopt a correction that controls for the large variability in the number of daily test, which, obviously, affects the number of official daily cases.

“For the UK, overall it is likely that we are approaching the peak of the epidemic, which the model pinpoints during the current week. This timeline holds even when accounting for the large variability of daily tests. It will then take around one to three weeks before the epidemic shows half-way on the decaying path. The dynamics of the UK path are driven by England, particularly the London area, and Wales, the regions of which share a very similar predicted timeline. Importantly, these predictions are conditional on strict social distancing: as they are likely to be imperfect, the day of the peak might be delayed by few days. In the case of Italy, the final estimated peak was 5 days later than the one originally estimated.”

Roberto Pancrazi, ‘Estimating and Forecasting Covid-19 Evolution in the UK and its Regions: a Brief Note’, CAGE Briefing Note no.20

CAGE is a research centre based in the department of Economics at the University of Warwick. We conduct independent policy-driven research informed by culture, history and behaviour. Our aim is to move beyond traditional measures of economic success to consider broader influences on global prosperity; from happiness and cultural attitudes to voter preferences and political institutions. We analyse historical and contemporary data to draw out lessons for modern policy. CAGE is supported by the Economic and Social Research Council (ESRC).