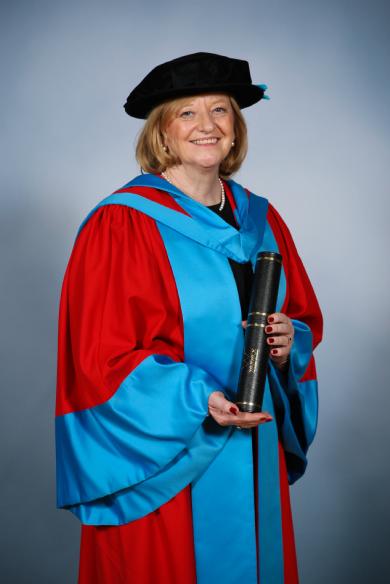 Listen to a podcast with Dame Fiona Kendrick at:

Universities that work closely with business and industry are best placed to equip their students with the skills for the world of work, according to Dame Fiona Kendrick DBE – “and I see the University of Warwick as being really at the fore of being externally focussed.”

Dame Fiona made her remarks as she received her Honorary Doctor of Science degree at the University of Warwick on 17 January.

Until recently Chairman and CEO of Nestlé UK and Ireland, a company that she has been associated with for many years, Dame Fiona has held a number of roles looking at employment and the skills agenda nationally, including as a UK Commissioner for Employment and Skills and Deputy Chair of the Institute for Apprenticeships Board.

Much of her career has been spent representing the food and drink industry at some the highest levels. But she began her career in teaching and has taken forward that personal passion for the youth employment and skills agenda through to today.

Speaking before she was awarded her honorary degree before an audience of graduates and their families, she offered some insights into what employability means to businesses, and how university can equip you with those valuable skills.

Dame Fiona said: “It’s a real honour and a privilege to receive an honorary degree from the University of Warwick.

“When we’re employing young graduates today we need them to be team players; we need them to be collaborative; we need them to actually get along with people, to have great interpersonal skills; to be able to communicate well, and I’m not just talking about verbal communication, I’m also talking about non-verbal communication in the form of body language, plus, very importantly, listening skills. We need people with emotional intelligence so they can be sensitive, not only to their own emotions but also to others. But, critically, we need people with problem-solving capability. That is a key employability skill that we look for.

“I see universities as playing a key role, and I see the University of Warwick as being really at the fore of being externally focussed. If universities are working with employers in their local or national area it means that they have a much better understanding of the skills that business and industry are looking for.” 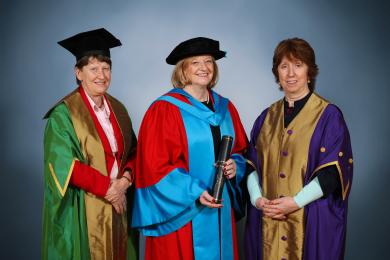 Her commitment to employability can be seen in her role with the New Model in Technology and Engineering, the new engineering university in Hereford that Warwick is also a partner in.

She said: “What has particularly drawn me to the New Model in Technology and Engineering university is the fact that they are specifically looking to graduate just engineers, which we know are so crucially required in the UK. I spent some time as UK commissioner for Skills and it became obvious that there were many, many key skills that we need as a country. And Engineering, we know, plays a vital role in the UK’s economic and societal wellbeing.

“What NMiTE is doing is working really closely with big and small employers and the whole curriculum is being co-developed with employers to make sure that those engineers are going to be equipped with all the right skills that they’re going to need to be work ready.

“It’s important to have a fantastic university with a great academic reputation like the University of Warwick supporting and validating us. This is a university that is actually very creative, very innovative and really externally focussed, so for us it was a really obvious choice to have Warwick work with us. “

She concluded by reflecting on her experience of the food and drink industry, and some encouragement for those considering it as a career:

“It is a fantastic industry. It is an industry that I have been in for forty years, it’s our largest manufacturing industry in the whole of the UK. What is great about it is that it is characterised by both large and small employers, and so you can have such a varied career in there. You can move across many different companies and many different functions which I think will mean that you will become an incredibly strong leader.”